BERBERA–Somaliland Port Authority has confirmed that no vessel from Yemen will be allowed to arrive in the port of Berbera without having port clearance.

This was disclosed by the port authority and has put in place a ban on ships from the war torn country of Yemen.

According to a directive issued by the port has said that in compliance with and carrying out the safety and security precautions of international maritime navigation pertaining to seas and ports that the port authority has banned ships without port clearance cannot dock the port of Berbera.

The authority has reached the decision based on the security situation concerns in the Gulf of Aden, Red Sea, Yemen and the region that Somaliland is located.

The port authority has apprised of business people and traders in advance on the ban.

Captain Abdirahman Ali Ismail, head of the department in charge of the sea has issued the directive. 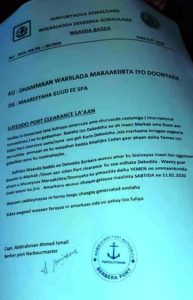