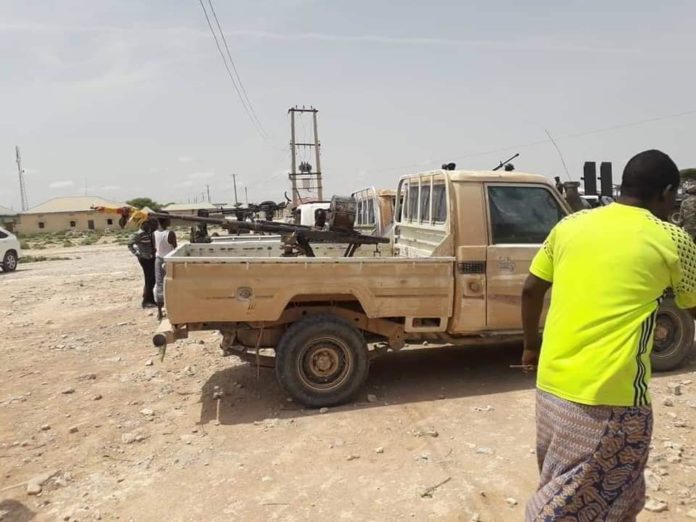 The ongoing communal violence in Eil-Afwein is a tragedy.The communal violence in Eil-Afwein has been going on and off for the last seven years. Dozens of people from both communities are dead and wounded. The violence has created a climate of mistrust between the two sub-clans, and it has also hampered economic development in the Sanaag region. But this week, the level of violence has escalated into an unprecedented level: One of the sub-clans has used technical weapons to slaughter more people.

The clan elders, faith and political leaders have tried repeatedly to stop the violence and to bring peace and reconciliation between the rival sub-clans. However, most of the ceasefires or the peace-agreements that have been brokered by the peacemakers were repeatedly broken primarily by the ‘Baida” sub-clan side

As people who are adherent to the Muslim faith, the Quran directs peacemakers to step in and mediate rival factions before confrontation escalates into more bloodshed.

In fact, the Quran states, “ And If two parties of the believers quarrel, make peace between them; but if one of them acts wrongfully towards the other, fight that which acts wrongfully until it returns to Allah’s Command, then if it returns , make peace between them with justice and act equitably; indeed, Allah loves those act equitably.( al-Hujurat, 49:9).

But in the case of Eli-Af-Wein violence, the peacemakers did not follow the instructions of the above Verse. They failed to make peace with justice because they failed to hold the perpetratorsaccountable on their transgression.

It’s clear that Eil-Afwein communities have been under siege for over seven years because of Buur-Madow’s sub-clansmen who are killing innocent people with impunity.We are sick and tired of Buur-Madow’s tactics to undermine the peace in Sanaag, while he was getting state sponsorship or protection from the previous Silanyo administration.

The previous Silanyo administration was complicit on the violence because it failed to take action against the assault of Buur-Madow’s sub-clan. But many people were expecting from the new Bihi administration to be more pro-active to finding a lasting solution on the communal violence in Eil-Afwein. However, that did not happen. Instead, more attacks, more killings are still unfolding.

Buur-Madow is a man who has a shady background: He had never held a real job in his entire adult life. In the early 90’s, he used to make money from extortion and kidnapping, including businessmen and held them hostage until ransom was paid in Sanaag region.

After the clan identity based multi-party political system was introduced in Somaliland, he became a king maker. He made money using his sub-clansmen as a vote bank for the Presidential elections. For instance, in 2002 election, he delivered their votes to Riyaale, and he won the election. But in 2010 and 2017 elections, he supported the Kulmiye party.

Guban Media has little information on why these two sub-clans are fighting. It is possible that these communities are fighting for scarce resources like water and pasture.

Eil-Afwein is a mostly rural county, and the reach of government services such as water and electricity, education and health is limited if not non-existent.

We can no longer tolerate renegades like Col. Aare or Buur-Madow to destabilize the Sanaag region—the largest region in Somaliland in land mass. A region has a great potential for economic developments in terms of mining, fishing, agriculture and even tourism.

Time is running out of Mr. Bihi; he must act swiftly because Somaliland’s enemies both domestic and foreign, and ‘sowers and exploiters of division’ are plotting to harm the nation. The violence is east Sanaag is just the tip of the iceberg. We must be vigilant to protect and defend our freedom. We can’t become complacent.

Keeping the lawlessness that prevailed in Sanaag is a risky we can’t afford.

Buur-Madow is warlord disguising as a sub-clan chief. His militias undermine peace and security, and government authority in Sanaag region, which is unacceptable.

Armed militias should not have place in today’s Somaliland. It’s time for Somaliland army to disarm Buur-Madow’s militias. Doing so would make the region safer and more secure. With more security, government will be able to deliver more development aid on water, education and health, and tar roads.

But first, the carnage in Eil-Afwein must stop, and law and order must be restored because those communities deserve to live and work in peace and a chance for a better life.