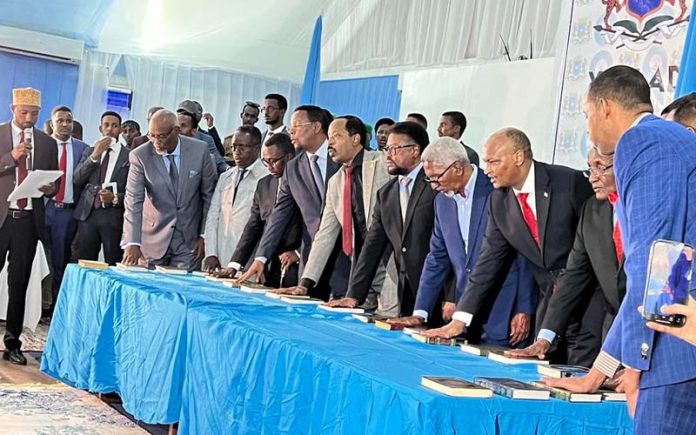 Somalia’s new parliament was sworn in on Thursday after long-delayed elections, but the country’s President and Prime Minister continued to wrangle over 16 seats whose votes have yet to be held.

The Horn of Africa nation has seen months of political impasse over the handling of parliamentary polls after the President’s constitutional term expired in February 2021 and parliament’s mandate ended in December 2020.

New members of the bicameral parliament were sworn in at the heavily fortified Afisyoni camp in the airport of Somali capital where hundreds of people, including the Prime Minister, opposition figures and other renowned politicians had gathered.

Mortar shells targeted the camp early on Thursday as new MPs headed to the venue for the swearing in ceremony, though casualties have not been immediately known. Al-Qaeda-linked militant group Al-Shabaab claimed responsibility.

Somalia’s parliamentary polls have been marred by corruption and nepotism, with dozens of former parliamentarians blocked from contesting while others were stopped from travelling to their constituents.

Former director of the spy agency, Fahad Yasin, who is the right-hand-man of Somali President, has missed the swearing in ceremony after an election that had handed him victory was nullified by the election body, which also called for a re-run of the vote. Several attempts by Mr Yasin to lift suspension on his seat have come to no avail.

Dispute still remains over 16 parliamentary seats that were due to have been held in the town of Garbaharey under the control of troops loyal to Somali President, but Jubaland authorities asserted that votes could not be held in the city, citing security concerns.

Analysts say the swearing in of the new parliament was an encouraging sign for an end to months-long stalemate that distracted the government from the fight against insurgents.

“Today 14 April 2022, is not like any other swearing-in ceremony of the Somali parliament; it indeed marks a great relief day for all Somali and IC who invested in Somalia to move forward,” Hussein Sheikh Ali, Director of Hiraal Institute tweeted.

According to tradition, the interim speaker of parliament is the oldest MP – Abdisalan Haji Ahmed Liban – who will oversee the election of the speaker and his deputies in votes expected to be held within weeks.