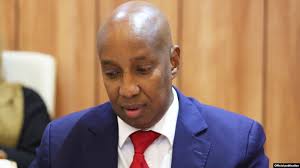 Somalia’s Federal Government has formally commenced to conduct an investigation of cargo plane crash chartered by Kenya-based African Express which was downed in Berdale town in Bay region. The plane was reportedly shot down with a rocket propelled grenade killing six people on board. The Captain of the plane Hassan Musa Bulhan, along with his co-pilot Mabruk Islam were operating the ill-fated African Express cargo plane as it was downed shortly before landing at Berdale airport. Capt. Hassan Musa Bulhan is the son of the African Express founder and CEO Muse Bulhan. Ground Engineer Charles Nganga and trainee pilot Omar Abdulle Jamal were among the dead along with two other passengers who were employed by the airline. The ministry of transport and civil aviation has sent a team of experts who will conduct a probe into the downing of the plane and will recover the Blackbox which will reveal vital information on the exact cause of the crash. Five bodies have so far been recovered from the crash scene, Somalia’s transport minister, Mohamed A. Salad Omar said. The minister traveled to Berdale airport along with the team of investigators. Somalia’s government promised to conduct an independent investigation to discover what has caused the plane crash and will share the findings with the public. The minister has said that Kenyan investigators will be involved in the probe since the airline was registered from Kenya and has hailed international support. Ethiopian troops under AMISOM mission are manning the airport.