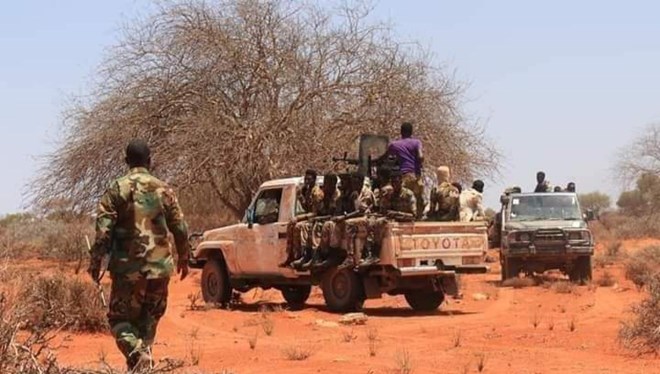 Somalia’s army bolstered by the forces of Galmudug regional state are still fighting with Ahlu Sunnah fighters for control of the town of Guriel in Galgudud region in the third day of fierce fighting that has left dozens dead and more than 100 wounded.

Fighting broke out in the town on Monday after it saw a lull in the fierce skirmishes on Sunday night. Both sides have exchanged heavy gunfire and there are reports of an intense shelling targeting an area believed to be still under the control of Sufi group in the north of Guriel.

Allied forces have retaken most of Guriel, including district headquarters and police station but rival troops are still holding out in the northern edge of the town, from where they have launched a number of counterattacks since Saturday, killing a number of leading military figures and soldiers.

Government troops claim to have retaken prisoners and a number of military vehicles used by ASWJ in gun battle, saying the rival forces have besieged in small quarters at the University of Guriel.

Authorities gave Ahlu Sunnah leadership and fighters a two hour ultimatum to withdraw from the time on Sunday and later begun striking the holdout area with mortar shells, blaming the other side for the resumption of the clashes.

District official earlier said ASWJ leader urged a temporary ceasefire for his fighters to be able to burry the dead, though the count not be verified independently.