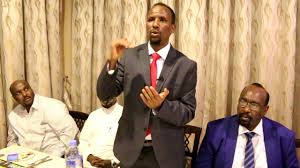 Somalian legislator hailing from Somaliland has strongly protested against the economic and diplomatic embargo that Villa Somalia resorted to isolating the republic of Somaliland. A statement issued by Senator Mustafe Mohamud Qodah has reprimanded Villa Somalian authority of its move to alienate Somaliland and imposing economic and development sanctions. The member of Somalian parliament has warned that the move taken by Villa Somalia will only worsen the situation between Somaliland and Somalia. He said that the conspiracies conducted by Villa Somalia against Somaliland ranging from the rejection of Berbera port deal with Dubai Ports World, undermine the New Deal, and the letter from Somalia blocking livestock export from Berbera indicate that Somalia has waged a direct aggression against Somaliland. The steps taken by Somalia would have negative repercussions over Somalia and Somaliland ties added the Senator. Mr. Qodah went on to say the south is fueling the fire between Somaliland and its Somalian counterpart. The parliamentarian also said that many people from Somaliland including politicians, traders and Somalia Federal Gov officials are currently residing in South Somalia and where not given the chance to offer their opinion over taking decision impacting on Somaliland. The Somalian legislator called on officials hailing from Somaliland who are in Mogadishu to urgently come together to hold a convention to address these pressing issues and to sort them out.