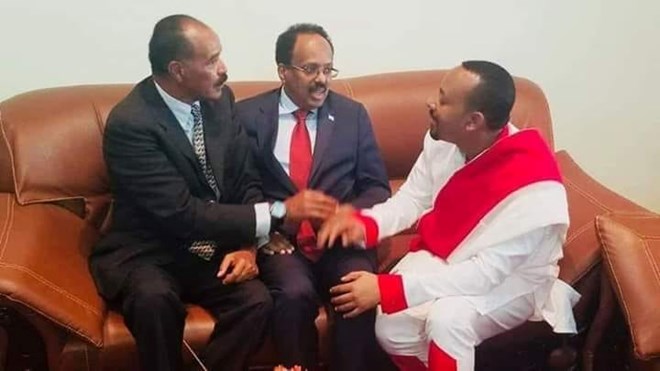 Somalia should realize that both Eritrea and Somaliland were two separate countries from Ethiopia and Somalia respectively; and the status of their unification with their partners was different. Somalia and its leaders in Mogadishu should remember that Eritrea was seized forcefully by Ethiopia after the end of its trusteeship period, and declared as part of Ethiopia’s own territory. Somalia and its leaders in Mogadishu should not forget that Somaliland was not seized forcefully by Somalia; but it is Somaliland who decided on its own wish to unite with their brothers of Somalia, in order to spearhead the unification of the five Somalis.
After 30 years of Eritrea’s continuous liberating wars against Ethiopia; Ethiopia compulsorily faced the bitter fact to accept to declare the independence of Eritrea after a conditioned referendum. This happened nearly after Somaliland declared its statehood sovereignty on its own wish, as it did the unification. Somalia should be aware that Ethiopia was forced by reality to retreat from its unreasonable political stand of Eritrea’s status as part of great Ethiopia; and accept the truth on the ground, recognizing Eritrea as an independent state. If Ethiopia who seized Eritrea came to know that its annexation plan won’t go any more; Somalia should ask itself can it be possible for her to compel Somaliland to remain as part of its territory?
Somalia should remember that Ethiopia and Eritrea had been at odds and disputes all along that period of Eritrea’s independence. These long lasting disputes caused a destructive war between the two countries from 1998 to 2000 that has claimed 100,000 lives, with another 18 years of border military standby against each other. Somalia should not ignore that the two countries – Ethiopia and Eritrea gained from their hatred and enmity with each other nothing but mass destruction of cities, villages and infrastructures; loss of thousands of human lives; negative economic effects on their countries; and long lasting negative consequences on security, stability and development.
The leaders of the same two neighbor warring countries we mentioned above realized that the only thing to be done is to solve and sacrifice their differences for peace; moved forward to a practical and achievable decision by signing and implementing a peace agreement that ended their quarter of a century long conflict. Really that step taken by these two head of states resembles the actual truth of a determined, open-minded and realistic leadership. Taking these political events as an example, Somaliland is inviting Somalia to take together a courageous step, like the bold & historical step taken by the leaders of the two neighboring countries Ethiopia and Eretria; which they ended their 20 years long conflict and opened a new horizon for cooperation and betterment of their peoples.
This is really the best model we can follow in resolving Somaliland/Somalia conflicts. Because no country however powerful they assume themselves will ever be able to force Somaliland to retreat its statehood and sovereignty.“Excellence comes when you leave thoughts of impossibilities behind, and live by the focus of reality and hope in the face of difficulty”. If this policy of being two countries living side by side with peace and bilateral relations does not satisfy Somalia and its leaders, thinking too much about new reintegration of Somaliland & Somalia; they are just fooling themselves with thoughts of impossibilities.