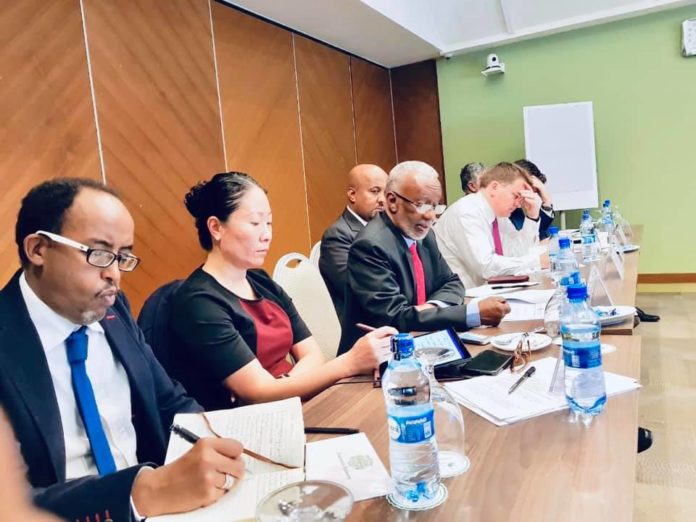 Somalia has snubbed a meeting called by the international community to discuss its future relationship with Somaliland.

Key in the meeting was a discussion on regional Horn and Red Sea dynamics and the implications of for the Somalia- Somaliland process.

The meeting was recently held in Nairobi. While a delegation from Somaliland led by Foreign Affairs and International cooperation minister Yassin Hagi Mohamoud Hiir ‘was in attendance, there was no representation from Somalia who claim Nairobi was not the best venue. There has been frosty relations between Kenya and Somalia in the recent past.

The meeting between the two sides was facilitated by the Center for Humanitarian Dialogue.

Despite the absence of Somalia representatives, the meeting opened on scheduled time and Somaliland presented its case. There was representation from the United States of America, European Union, Sweden, Turkey, IGAD and the United Kingdom.

Somaliland ambassador to Kenya Bashe Omar termed the absence of Somalia as regrettable.

“It is unfortunate and regrettable that the Somalia government opted not to attend this very important meeting,” said Bashe.

“It is a clear show of their unwillingness to find a lasting solution to the issues that have been affecting us,” Bashe added.

“However, we (Somaliland) remain committed to the dialogue and we will avail ourselves anytime when called upon by our international partners who also have been keen to bring us together.”

“Somaliland considers it a matter of great regret, that the FGS has not taken the opportunity to continue our dialogue,” he said.

The Chief of Staff of The Office of the President, Federal Republic of Somalia, Dr Nur Dirie Hersi had earlier tweeted his country’s position on the meeting.

Dr Hersi in his tweet said: “Somali government representatives will not participate in the expected Consensus Building Meeting in Nairobi. However, we would like to confirm that the government is committed to engage in constructive dialogue with Somaliland when a suitable venue, agenda and participants are agreed.”

The talks were to be headed by European Union Special Envoy for the Horn of Africa Alex Rondos.

Somaliland, a self-declared independent state has been recognized by various organizations and countries as an autonomous state. The country separated from Somalia in 1990 at the start of the civil war.