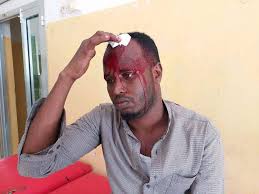 Journalist Mohamed Ali Siad, deputy director of Radio Galkayo, was attacked by police officers on Sunday 23 September in the Somali city of Galkayo at the police station. The assault took place when the journalist arrived at the station’s commander for an interview appointment about a security operation carried out by police earlier. The International Federation of Journalists (IFJ) joins its Somali affiliate, the National Union of Somali Journalists (NUSOJ), in condemning this aggression which and demanding that Somali authorities bring perpetrators to justice.

Ali Siad said that he demanded an interview with the Commander of Puntland Police Division for Mudug Region, Colonel Mohamed Ali Awale, about a security operation carried out by his officers in Galkayo city the night before. The commander refused to respond to Said’s questions by phone but asked the journalist to come to his office.

NUSOJ’s press release, when Siad arrived, security guards were waiting for him at the station’s entrance and blocked him from getting in. They attacked him , punched him and hit his head against the wall. Moments after, the Somali journalist was released bleeding and with several injuries.

Ali Siad filed a report at a police station to denounce the abuses he had suffered. The police reportedly claimed that they will carry out investigations, NUSOJ added.

This is abominable attack on journalist’s life. The beating and torture of Mohamed Ali Siad serves only one purpose: to scare journalists from covering sensitive issues like security. People have the right to know what happened in their neighbourhoods. Beating or killing a journalist isn’t feasible and will not make Galkayo a safe town.

The IFJ condemns the brutal assault of journalist Mohamed Ali Siad in Somalia by police officers and urges authorities to investigate this and bring perpetrators to justice. We are concerned about the situation of journalists in Somalia as attacks on them grow daily; we demand authorities protect journalists, not beat them up.

Two journalists have been killed in Somalia in 2018 and several attacks, aggressions and threats have been reported so far. Regrettably, many of them have gone unpunished. The IFJ and the NUSOJ submitted a

joint statementto UN’s Human Rights Council to draw the attention of international community to the systematic human rights’ violations and attacks to freedom of expression in Somalia.