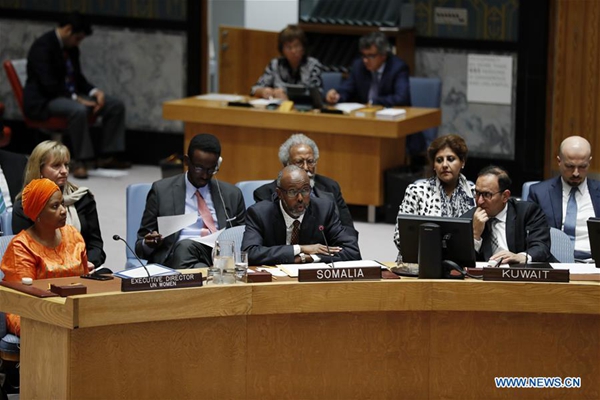 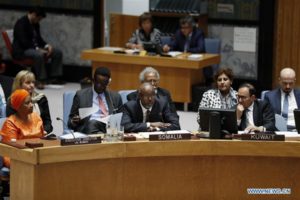 Abukar Dahir Osman (C, front), Permanent Representative of Somalia to the United Nations, addresses the Security Council on the situation in Somalia, at the UN headquarters in New York, Sept. 13, 2018.

The outgoing UN envoy for Somalia, Michael Keating, on Thursday warned that terrorism and political differences will derail progress in Somalia.

Al-Shabaab remains resilient in the Horn of Africa country despite the efforts of the UN peacekeeping mission and Somali security forces to contain it, Keating told the Security Council.

The terrorist group is regularly using targeted assassinations, improvised explosive devices and extortion both of communities and businesses, he said.

Managing and mitigating this risk requires systematic degradation of al-Shabaab as well as increasing the legitimacy and capacity of government. One without the other will not work, he said.

Keating, who is also head of the UN peacekeeping mission in Somalia, known as AMISOM, warned that political differences in the country will bring progress, passage of key legislation, and implementation of the government’s reform and security agenda to a grinding halt.

The deficit of trust between central government and federal member states, and the recent decision by the latter to suspend cooperation, are very worrisome, he said.

Fundamental issues, including how power should be shared, allocated and separated, the nature of the federal state, the respective powers of the federal and state governments, should be addressed through the constitutional review, he said.

Strong and differing views about federalism are legitimate but if the political culture is to change, they need to be resolved through dialogue and not through unilateral action, he said.

More immediately, the greatest challenge is to reach political agreements that allow forward momentum without prejudicing the outcome of the constitutional review, he said. These include the electoral law, integration of security forces, and resource and revenue sharing agreements.

Trust requires respect for due process and commitment to non-violence, a willingness to engage, to make compromises for the broader good, he said.

“This was my parting message to Somali leaders,” said Keating, who will be replaced by Nicholas Haysom of South Africa on Oct. 1.

The Somali population will once again face the prospect of humanitarian catastrophe, he warned.

The risk of this happening is high, and millions are already living on the edge of dignified existence, he said.

Future crises will result from the combination of climate-related shocks, armed conflict provoked by al-Shabaab and unresolved grievances, competition over natural resources and systemic marginalization of certain groups, he said.

The objective should be to reduce human vulnerability by creating jobs, investing in urbanization, water management, access to clean power and adding value to the country’s enormous economic potential whether in livestock, fisheries, agriculture or information technology, said Keating.

The future of Somalia is in the hands of the Somalis, he said. “Success depends upon political, business, traditional and other leaders working together for the common good, leveraging the country’s potential wealth to transform prospects for people, especially the young.”

The more that political leaders show unity, the greater the opportunity, and the responsibility, of international partners to invest in all parts of the country and its leadership, he noted.