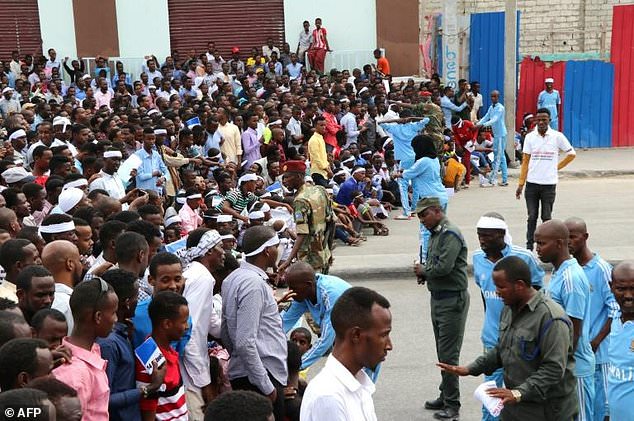 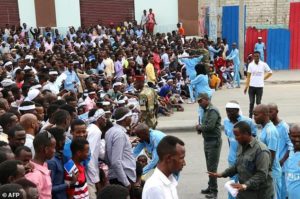 Somalia on Sunday executed by firing squad a man linked to one of the country’s deadliest ever attacks, one year after the tragedy which left over 500 dead, a court statement and police sources said.

Hundreds of Somalis gathered at a ceremony to mark the anniversary of the attack in which a truck packed with explosives blew up at a busy intersection, destroying some 20 buildings in an apocalyptic scene in a city used to regular explosions at the hands of Islamist group Al-Shabaab.

A year on, the Al-Qaeda linked group which still governs large swaths of territory, has never claimed responsibility, which observers attribute to the public outrage caused by the attack.

To coincide with the anniversary, a military court announced early Sunday morning that a member of the team involved in the attack, had been executed.

Hassan Adan Isak, was sentenced to death for “driving one of the vehicles used in the blast,” read a statement from the court.

“Today, the 14th October 2018, the death penalty was carried out against him.”

Isak was the driver of a vehicle which he parked near an airport checkpoint shortly after the truck went off, and was arrested for suspicious behaviour. The target of his attack was unclear and there were no casualties in the second blast.

Business at the Zoope intersection has returned to normal, and some buildings have been reconstructed, now carrying billboards depicting harrowing pictures of the blast and its victims.

A memorial tower has been erected in the middle of the intersection.

“All we can do is pray for them, I have lost them, I don’t think commemoration would bring them back to me, but I hope nothing like the October tragedy happens again,” said Omar Haji Mohamed, a disabled father who lost two children in the blast.

“I still cry from the bottom of my heart where people cannot see and only God knows how much I go through every day of my life after that tragedy,” he added.

Some frustrated residents said mourning would not solve the insecurity in the capital.

“I don’t think mourning is the right and sufficient answer to wipe the tears from the eyes of those who have lost their loved ones, these people were massacred, so the perpetrators need to be chased and eliminated,” said Ali Adan, a Mogadishu resident who lost three of his friends in the blast.

Abdisalan Mohamed, 23, who lost his brother, agreed: “I can still see the disaster right in front of me. We can mourn as much as we can, but it will not bring back our relatives, all we need is justice and protection.”