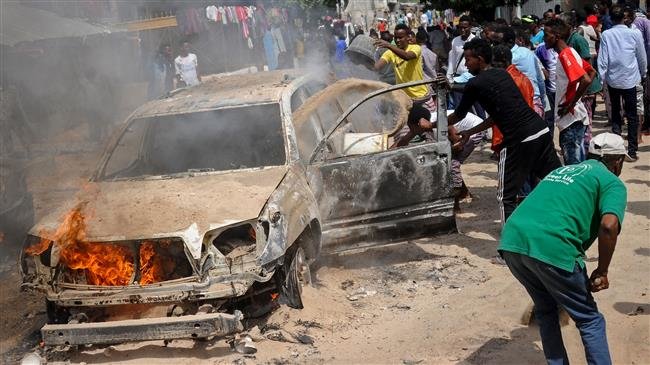 Somalia has executed a member of the al-Qaeda-linked al-Shabab militant group convicted of having masterminded a series of fatal car bomb attacks in the capital, Mogadishu, last year.

The prosecutor of Somalia’s military court, Abdulle Bule, confirmed that said the convict, identified as Abdikadir Abukar, had been executed on Monday.

One of the attacks targeted a hotel and claimed 10 lives. In another incident, a bomb exploded near the ministry of sport, leaving at least 9 people dead. A third car bomb also hit an Italian restaurant in Mogadishu, killing at least seven people.

The al-Qaeda-linked militant outfit, which has long sought to topple Somalia’s Western-backed government, was forced out of Mogadishu by African Union forces in 2011.

However, the terrorist group still wields control in large parts of the countryside, and every now and then carries out attacks against government, military, and civilian targets in the capital as well as regional towns.

The militants have stepped up their attacks in recent months.

On Saturday, a car bomb attack, claimed by al-Shabab, killed at least 13 people and wounded 17 others outside Mogadishu’s national theater, near the president’s heavily fortified residence.