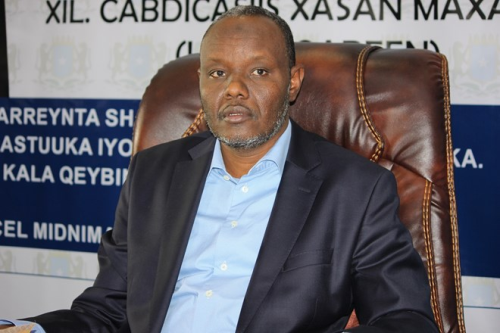 MOGADISHU– The minister in charge of Energy and water resources of Somalia’s Federal Gov’t tenders his resignation shortly on Monday in a pres conference held in Mogadishu.

The main reason that Hon. Abdiasis Hasan Ibrahim opted for resigning is to quit his ministerial post in order to qualify for the presidential candidate of South West administration in Somalia which is holding its presidential polls.

He cited that having thrown his name into the ring to contest the forthcoming South West administration of Somalia and further said that the candidate running for the presidency does not have a government post. Therefore, he announced his resignation as Energy and Water affairs minister from Somalia.

The minister who tendered his resignation has thanked the incumbent Somali Prime Minister, Hon. Hasan Ali Khaire but reports indicate that his candidacy will have negative ramifications on Somali Federal Gov’t.