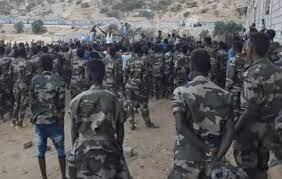 It came months after the incumbent President Hassan Sheikh Mohamud told media that Somali soldiers trained in Eritrea were involved Tigray conflict after being “sold” by the previous government of President Mohamed Abdullahi Farmajo.

The presidential spokesman said Mohamud met troops, who had completed training in Eritrea, and the government is working to return them home to be able to carry out their tasks.