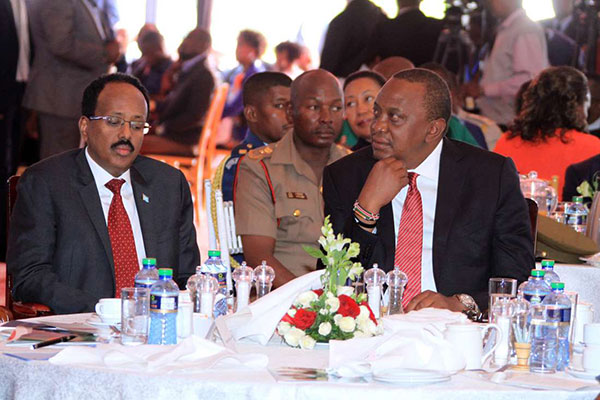 Somalia’s boundary tiff with Kenya has taken a new turn after Mogadishu barred its officials from attending any meetings hosted in Nairobi to protest last week’s visa denials.

The Somali government has also given non-governmental organisations (NGOs) operating in Somalia one month’s notice to relocate their centres to Mogadishu or be barred from operating there.

On Sunday, Somalia’s Ministry of Health and Human Resources wrote to UN agencies and donors asking them to reschedule any meetings that were to be held in Nairobi.

“Due to recent travel issues to Nairobi, Kenya, the Ministry… will not be able to attend all planned and upcoming meetings, workshops, seminars and trainings to be held in Nairobi (and advices that) those events be held inside the country or… at alternative countries for ease of travel,” said Director-General Abdullahi Hashi Ali.

The decision means that Somali officials will skip the UN Habitat Assembly, which starts Monday in Nairobi and is to be opened by President Uhuru Kenyatta. Somalia’s Ministry of Planning also said any NGOs still running operations from Nairobi will be barred from working inside Somalia.

NGOs like World Vision, Save the Children and Red Cross used to run their operations in Somalia from Nairobi due to insecurity. Most of them have since relocated to Mogadishu. In October last year, the Somali Cabinet had issued a directive to consolidate supervision of NGOs by requiring their offices to be inside Somalia.

The new order from the Planning Ministry seems heightened in the wake of the ongoing tiff with Kenya.

The ministry did not elaborate on which NGOs were still operating outside Somalia, but indicated that some of the agencies were running Somali affairs from Nairobi, Addis Ababa and Djibouti.

Last week, Somali government wrote to Kenya to protest what it called detention and deportation of officials in a delegation to Nairobi for lack of visas.

Mr Ahmed Isse Awad, the Minister for Foreign Affairs and International Cooperation said the move “contravenes the neighbourly bond” between the two countries, saying there exists bilateral arrangements for the privileges to remain.

“The government of Somalia therefore calls on the government of Kenya to consider the potentially destabilising impact of these actions and to uphold the long-standing relations between our two nations as well as diplomatic norms in the spirit of reciprocity and mutual respect,” he said in the official letter, which is known in diplomatic circles as a note verbale, last Wednesday.

Immigration officials said junior Minister of Water and Energy Osman Liban and legislators Ilyas Ali Hassan and Zamzam Dahir had not obtained visas at the Kenyan embassy as was required under the new rules. In turn, the Somali delegation that had been allowed in on foreign passports boycotted the EU event at the UN Office in Gigiri on Tuesday afternoon.

Traditionally, top government officials on official duty are allowed visas on arrival, based on a bilateral agreement signed between the two sides in 2016. Kenya has, however, changed the rule and officials must get visas at the embassy in Mogadishu.

The tiff has recently heightened after Somalia sued Kenya at the International Court of Justice, despite Nairobi’s protestations. Earlier this month, Kenya also directed all aircraft from Mogadishu to first land at Wajir for security clearance.

Somalia President Mohammed Farmaajo refused an out-of-court settlement as requested by Kenya, choosing instead to wait for the decision of the International Court of Justice.

One senior Somali official said this is partly because the Somali public thinks other modes of resolution could be politically manipulated, but also because President Farmaajo is banking on the verdict to shore up his ratings ahead of the 2021 elections.