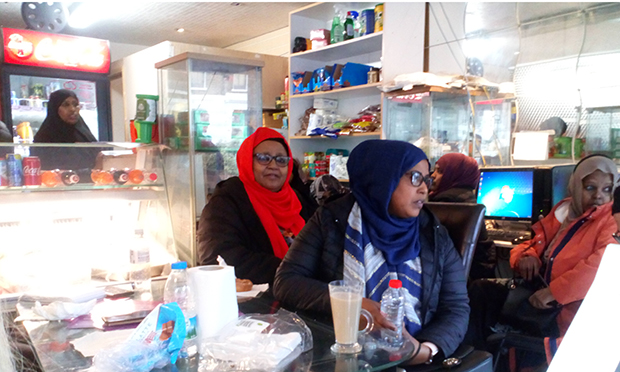 A Somali community project aimed at tackling social isolation is calling for a “safe space” in Hackney for its members.

The Social Isolation & Loneliness Project (SILP), funded by the council, currently meets in the Bilkhayr Community Centre, and is reportedly such a success that up to 75 people cram into the space for weekly meetings.

The Bilkhayr centre is an internet cafe comprised of two small rooms, one of which currently has water running down its walls.

Project member Fathia Mohamed said: “If we had a community centre, even if it were small, we could come in every day, you’d know somebody there, and if you had a problem you could go straight there.

“Things like if you need to write a letter, or make a call, or help filling in a form, because my English is not good.

“Sometimes we come here to the shop and we get help, but you can’t come in every day. It’s a big problem.”

Another said: “We’ve been here for 27 years, and we’ve never had a safe space in Hackney, somewhere to go and get support. When we struggle, we have no community support to fill in forms and that sort of thing.”

Speaking to the Citizen last week, SILP’s members, the majority of whom were women, described having to travel outside of the borough for support services, while praising the existing project for the “phenomenal and incredible” job of bringing the community together in the way it has done so far. 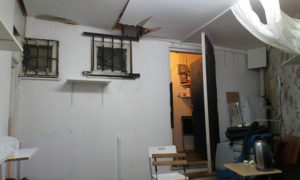 There is not currently a dedicated Somali community centre in Hackney, with SILP’s figures showing many of its members need support – 60 users when surveyed said they felt socially isolated or lonely, with 69 users saying that there is “no safe space” for them locally.

SILP recently received funding through Hackney Connect, a programme running between 2015 and 2021 and bankrolled by the National Lottery Community Fund, which aims to improve the wellbeing of local residents aged 50 and above.

The programme is working with local voluntary and community partners to reduce and prevent social isolation for older residents in Hackney, particularly for people more at risk, such as BAME communities and people with learning disabilities.

However, it appears that out of necessity SILP has begun to fill other functions, with its members now coming to those who run it for support across a range of different areas.

Longstanding community activist Bashiir Hassan, who runs the site, steps in to help project members fill in forms or engage with services on housing, health or immigration issues.

The Town Hall has said that it “recognises the challenges of space” for voluntary organisations such as SILP, with the council said to be currently exploring ways to “maximise the affordability and use of available space”, including looking at options around sharing and flexible use, as well as at the suitability of the properties themselves.

It is understood the council’s voluntary and community sector strategy raises the prospect of connecting with other developments across the borough, including organisations that already provide affordable workspace to non-profits as well as identifying opportunities in regeneration areas.

Community organiser Abdi Hassan invited Cllr Caroline Selman (Lab, Woodberry Down), cabinet member for community safety, policy and the voluntary sector, to the Bilkhayr centre last week, saying that he “wanted to bring [the council] closer to say that we exist. This community is real”.

Hassan said: “Somali women and the Somali community need support. We’ve had enough. Something has to change.

“I didn’t realise how big the problem was until we started scratching the surface. Issues relating to benefit cuts, to Universal Credit, that relate to housing, there are ten or eleven different public-sector crises, and we have to do something.

“This isn’t to complain, that isn’t what we’re about. We want to encourage business enterprise, and to be able to provide small grant funds to our people to be able to say that they can get out of a poverty trap.

“They just want to feel safe. The idea of security, rather than going in to go in and get help. You want to be around people, and feel like you’re getting that support from statutory services, you want to feel like there is some safe space.”

Cllr Selman said: “I would like to thank the community group for inviting me to join them and for taking the time to discuss their views and experiences.

“The session demonstrated the huge value of the projects funded through Connect Hackney to reduce social isolation and loneliness.

“We are keen to continue to work with the group to make sure their voices and needs are heard and influence our strategy and services.”