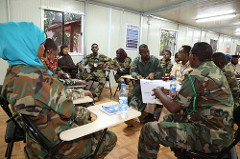 Baidoa, 3 March 2019 – Security officers in South West State have undergone training on how to tackle conflict-related sexual violence in their areas of operation.

“The purpose of this training is to raise awareness among Somali National Security Forces that conflict-related sexual violence remains a major challenge in the country due to its continued use as a weapon of war,” said Gloria Jaase-Nkundanyirazo, AMISOM Protection Officer.

Commenting on the increased cases of conflict-related sexual violence in various parts of the country, Ms. Nkundanyirazo noted that the training was tailor-made to empower security officers to take the lead in the fight against the crime.

Al-Shabaab and its affiliate groups remain the main perpetrators of the crime, which often targets vulnerable groups mainly women and children.

“We want to give them [Somali security officers] the necessary skills that will enable them to investigate the crimes and take action against perpetrators to help end impunity,” the AMISOM Protection Officer added.

“We are expecting them to be agents of change by raising awareness in communities, schools, mosques and families about conflict-related sexual violence and why we should all fight the crime,” said Chief Inspector Azagisnaba.

“It is our duty to protect human rights especially the rights of the vulnerable groups. We are ready to share what we have learned with our colleagues who did not attend the training,” said Mr. Mohamed.

His remarks were supported by Maryan Sheikh Ibrahim, a representative of the state Ministry of Women and Human Rights who expressed optimism that the participants will be effective agents of change in their communities.

“It was an important workshop and we have gained valuable skills. We have discussed various topics including sexual and gender-based violence, use of children in armed conflicts and protection of the rights of children,” Ms. Maryan said.

The training of Somali National Security Forces on human rights issues is part of AMISOM’s capacity building programme aimed at preparing security institutions to take charge of the country’s security.

Baidoa is the third town to host the training after Kismayo and Belet Weyne. A similar training is scheduled for Mogadishu this month.