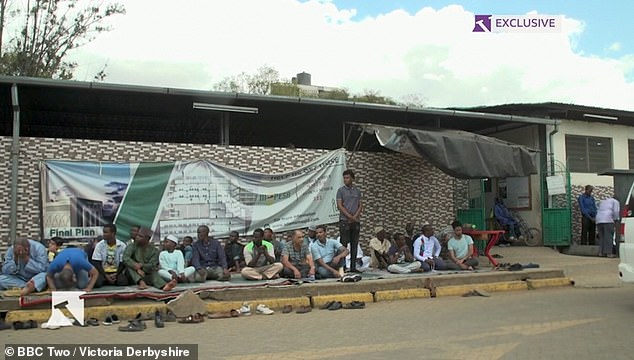 Hundreds of British parents are sending their teenage children back to East Africa to avoid the knife crime epidemic that has struck London and seen 51 murders this year.

And the teenagers say they feel safer there, despite the Foreign and Commonwealth office advising against all travel to Somalia and warning against the threat of terrorism across Kenya.

One Somali mother, Amina, was interviewed on the BBC’s Victoria Derbyshire programme and told the harrowing story of how her 15-year-old son was stabbed four times, just 17 days after he returned from a year-long stay in their homeland.
She said: ‘They damaged his bladder, his kidneys, his liver. He’s got permanent damage.

‘He was safer there [in Somaliland] than he was here, 100 per cent more safe than in London.’

Two in five Somalian families in London are sending their children home to avoid the knife crime epidemic hitting the capital, according to the mayor of Islington.
Mayor Rakhia Ismail, a mother of four who came to London as a Somalian refugee, said that parents are making the drastic decision because they believe it will save their child’s life.

So far this year 100 people have been stabbed to death in the UK.

According to the BBC, eight per cent of the victims were of Somali heritage.

Earlier this morning a man in his 30s was stabbed to death in London, sparking the capital’s 51st murder probe this year.

The most recent crime statistics show that there are two killings every day on Britain’s streets – the highest level in a decade.

A mentor of young Somali men in London, Jamal Hassan, explained on the Victoria Derbyshire programme that parents will do anything to protect their child.

He said: ‘If it means that child doesn’t finish school, college, university or he will not have a good job by the time you come for them the future is not really important.

‘What is important is that child’s life.’

Yusuf, a 21-year-old boy who grew up in London that did not want to be identified, told Mr Hassan that he moved to Nairobi because he was seeing people get stabbed ‘every other day’.
He said: ‘There are people in my neighbourhood, someone who I really knew, who lost his life.’

Ms Ismail said: ‘Does the parent wait for her child to be killed?

‘Or does the parent take a decision – quite a drastic decision – to take him all the way back to wherever that child is from originally?’

One mother who sent her child to Africa in a bid to avoid London’s knife crime said she can now sleep at night knowing that the police sirens she hears have nothing to do with her son.

London’s latest stabbing comes just two days after a 23-year-old was knifed multiple times in Tower Hamlets at 4.30pm in the afternoon.

He was the 50th victim so far this year – and it was the eighth murder in the capital this month as Britain struggles to get to grips with a knife epidemic.