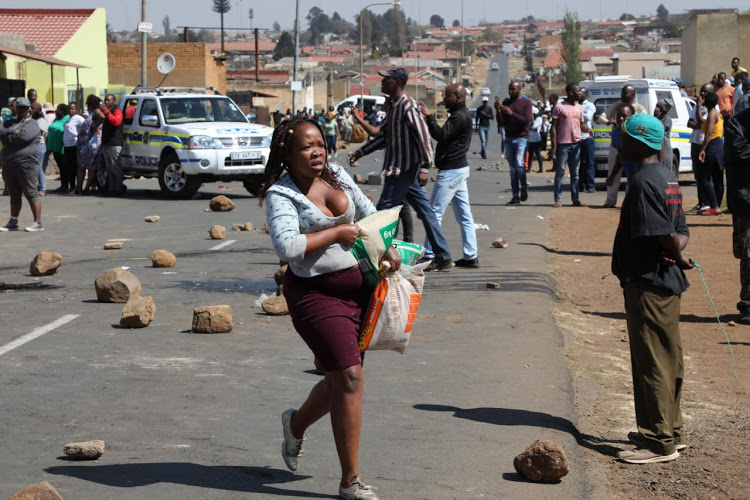 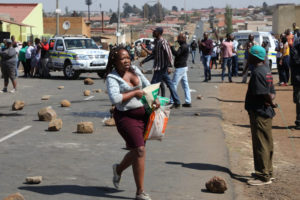 Residents of Jabavu, Soweto, loot a foreign-owned spaza shop on August 29, 2018, after Banele Qhayiso was allegedly shot dead by one of the shop owners.
Image: Thulani Mbele

A Somalian national helping his fellow countrymen pack up a shop in Diepkloof‚ Soweto‚ said on Thursday they were targeted by looters after the health ministry announced an investigation into the alleged selling of suspected expired or counterfeit goods.

Locals had gone on the rampage on Wednesday‚ looting their shops. This followed a statement that a probe was under way into unconfirmed reports of “fake” food being sold by foreign spaza shops in several townships.

The shop owner‚ who spoke to TimesLIVE on condition of anonymity‚ said prior to these allegations there had been peace between them and the community they served.

“People are right [for being angry]. There is a law‚ there is a government. If the government has opened the way [through announcing the investigation] what will happen? You and me we don’t have a problem. The problem in South Africa is the government‚” he said‚ emphasising that he did not blame the locals for their actions.

He suggested that the government had acted recklessly in handling the matter‚ adding that they‚ as foreign nationals‚ could also retaliate.

“Right now‚ even as you are talking to me‚ you are not safe right now. I can kill you and go‚” he said‚ attempting to find the words to explain how volatile the situation was.

Armed police were stationed outside the shops that survived Wednesday’s looting and provided protection as the shop owners packed their possessions. Trucks‚ vans and taxis were used to escort the scores of foreigners out of the township.

In at least two of the shops that TimesLIVE visited‚ locals were peacefully assisting the foreign nationals in packing their belongings.

This was in stark contrast to the scenes which unfolded in the White City section on the other side of the township on Wednesday afternoon where a man was shot dead amid the looting.

It was alleged that the victim was a paying customer who was caught in the crossfire when looters barged into a shop. The shop owner was said to have fired a shot at the looters but struck the young customer in the chest. He stumbled outside the shop and died a few metres away from the shop.

Following his death‚ more shops were looted with at least two other people reported to have been killed in the unrest.

In its announcement earlier in the week‚ the health ministry explained that if the allegations about food being sold by the shops was true‚ that food could pose a serious health risk.

“While the authenticity of these videos cannot be verified‚ some cases are currently being investigated by the environmental health practitioners based in municipalities. We have the responsibility to determine if there is truth to these allegations‚ and‚ where necessary‚ take urgent action against perpetrators‚” said health ministry spokesman Popo Maja.

Authorities have raided several shops in a bid to verify the authenticity of the allegations.