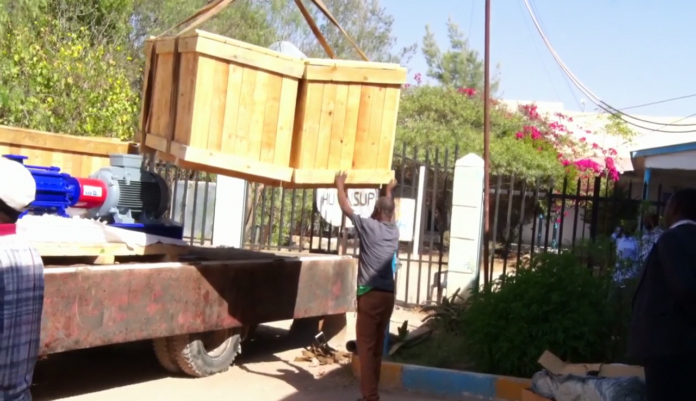 As new major ones are installed at Hargeisa

Hargeysa-The Water Resources Minister Hon. Suleiman Ali Kore has handed over two motorized water pumps to the Gebiley Water Agency Manager hence at the same time sanctioned the Botor Borehole where a rig is to plunged for a water well.

The minister who was in a monitoring tour in the region handed over the machines while flanked by Telecommunication Minister Hon. Dr. Abdiweli Sh. Abdillahi amongst other senior government officials. Hon. Kore noted that having had the regional water agency being comprehensively equipped with their production appliances the residents could thus be justified to have the officials in check.

He quipped that he would later give further details of costs and amount of appliances distributed in the region. The minister visited as far as Geed-balad water resource centre in his tour.

He reiterated the President’s prioritization of water-for-all projects.

The local leaders led by the regional governor also addressed the function.

The new machines that are to enable 24 hour system services are set to take off once overall upgrading is dispensed.

At hand were the engineers from the KSB water machineries German manufacturers who were busy with the installations at Geed-Deeble.

The HWA manager Mr. Mohammed Ali Darod gave the media an overall update of the upgrading efforts of the water project.