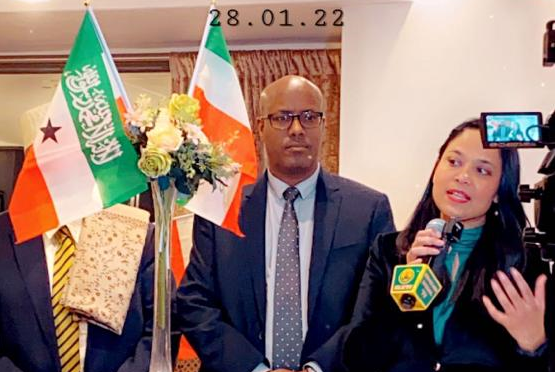 The event was organized by the Somaliland community in Tower Hamlet, London, a former UK councilor who recognized Somaliland’s independence, and was attended by various dignitaries as well as MP Rushanara Ali.

The event showcases the energy of the Somaliland diaspora in the UK as they work together to advance the recognition of their country Somaliland.

Rushanara Ali, a South Asian native, was one of the speakers at a British Parliament debate on the Republic of Somaliland’s geographical importance to the world’s security, economy, and politics.

Rushanara Ali, a member of parliament, asked Heaton-Harris if the Somaliland issue was different from the Bangladesh issue, which led to Britain leading the way in making Bangladesh an independent state.

“I want to set an example for my country of origin, Bangladesh. The British government at the time directly supported the independence of Bangladesh and its independence from Pakistan.” She said.

“The British government did not say at the time that Pakistan should decide to secede from Bangladesh, Their work? Said MP Rushanara Ali.

Rushanara’s brilliant presentation was a historic example, comparing Britain’s role in the recognition of her home country of Bangladesh during the secession of Pakistan in 1971. After the people, The bloody conflict in Bangladesh has left at least three million people dead and Millions more were forced to flee the country, with more than 500 people subjected to human rights abuses and rape. Thousands of women and children, but this led to the birth of a new nation, Bangladesh, which became independent and joined the world map.