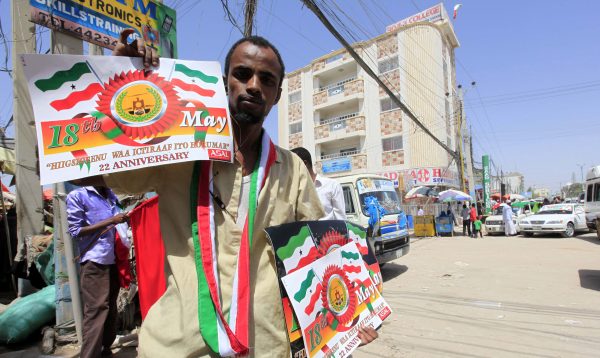 A Somaliland resident sells souvenirs a day before celebrating the 22nd anniversary of the self-declared independence day of the breakaway Somaliland region from the larger Somalia state, in Hargeisa May 17, 2013. Reuters/Feisal Omar.

For Washington, the issue should be practical: Somaliland has denied its territory both to pirates and to al-Shabaab (and other) terrorists. While proponents of Somali unity embrace a dream largely motivated by nationalism, the practicalities of unity may after 28 years also be impossible: Put aside how the experience of Somaliland under Somali dictator Mohamed Siad Barre shaped perceptions, lack of development and then tremendous violence. Even if those suspicions toward Mogadishu could be overcome, there are practical matters. As in much of the region, mortgages don’t exist. When people buy or develop property, they must put all their money down in advance. This leads to tremendous conservatism when it comes to the possibility of systematic change.

But, does diversity and even disputes about Somaliland’s eastern border with Puntland, one of Somalia’s federal states, undercut recognition of Somaliland as a distinct entity? Ali Haji Warsame, a native of Puntland and former CEO of Golis Telecom, and subsequent Puntland minister of education, has pushed back on twitter, writing:

To my assessment, what you did miss to mention in your article is the existence of same diversity within Somaliland context as being in the mainland, historical & legal requirement for separation and its implication on colonial borders in the Horn and Africa at large.

Warsame is correct that Somaliland is not uniformly Isaaq, although it is overwhelmingly so. Still, in various eastern districts, other clans live and, at a local level, predominate. Where Warsame is incorrect, however, is with regard to his certainty that the “implication on colonial borders in the Horn of Africa” would undercut Somaliland’s case: Firstly, the legal basis for Puntland’s border dispute with Somaliland is tenuous. Somaliland’s borders were set by a series of treaties beginning in the late nineteenth century and, regardless, all five UN Security Council members as well as numerous African states recognized Somaliland’s borders upon its independence in 1960. Puntland did not form until 1998. To recognize Puntland’s claims within Somaliland’s territory, regardless of clan affiliation or preference, would revise colonial borders.

While the African Union opposes revision of colonial borders, the case of Somaliland is interesting because its colonial borders have previously been recognized. This deserves a separate article (and will receive one). But, in the meantime, there is also ample precedent: Eritrea and South Sudan, for example. Many African countries also recognize the Sahrawi Arab Democratic Republic in the Western Sahara although history is not on the Sahrawi side.

If Warsame wants to make a legal case against Somaliland separatism, there is much room for discussion about whether promises and procedures were fulfilled dating back to 1960 although, ultimately, from a US policy perspective, the debate is more about whether current U.S. and international aid Mogadishu-centric policy does more harm than good both to Somali stability and to broader security interests.