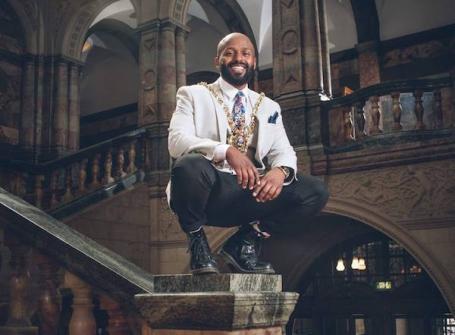 Magid Magid wants to be an advocate for young people and provide an antidote to the campaigns of fear, hate and division

SHEFFIELD’S FIRST Somali Lord Mayor has launched his campaign to be the Green Party’s lead candidate in the European elections if the UK participates next month.

Magid Magid, who is the youngest person to be appointed to the position of Lord Mayor in Sheffield, wants to be the region’s first Green Party MEP.

In a statement released yesterday, he outlined that the rise of the far-right and racism had played a significant part in his decision to seek the candidacy.

He said: “It was the rise of UKIP in the 2014 European elections and their fear-mongering anti-immigration propaganda that spurred me on to get politically involved. Five years on, the landscape in the UK and across Europe is dire; the far-right, more barbaric by the day, freely parade streets throughout the western world and foster hatred within our communities.”

Magid is also keen to represent young people’s interests and give them a political representative who is in tune with them.

He said: “As well as being a voice and a champion for all of Yorkshire and The Humber, I want to be an advocate for all young people across our region.”

He added: “At a time when young people are politically engaged, we need to present MEP candidates who look and sound like them, and who truly understand and speak for them.”

Magid, who is pro-EU, anti-Trump and backs a people’s vote on the future of Britain’s relationship with the EU, wants to provide an antidote to the campaigns of fear, hate and division, which he says we will inevitably see in throughout the European elections.

The 29-year-old, who came to the UK aged five with his mother and sister to escape conflict in Somalia, said he was aware that he was not the traditional type of candidate for the position but that people don’t want more of the “same old failing way of doing things”.

“As an outspoken working-class black Muslim refugee millennial, I know I may not be the usual candidate, I get that – but I believe I have collected more than enough effective representation and leadership experience, and have what it takes to put together a galvanising campaign that leads with compassion and with hope, which will be part of the national antidote to the campaigns of fear, hate and division that we will inevitably see in the European elections,” he said.

The European elections are due to take place on May 23. The UK will not participate in the elections if Theresa May manages to agree a Brexit deal with the EU before then.

Due to the proportional representation system of the elections, smaller parties have a greater advantage than they do in general elections in the UK.