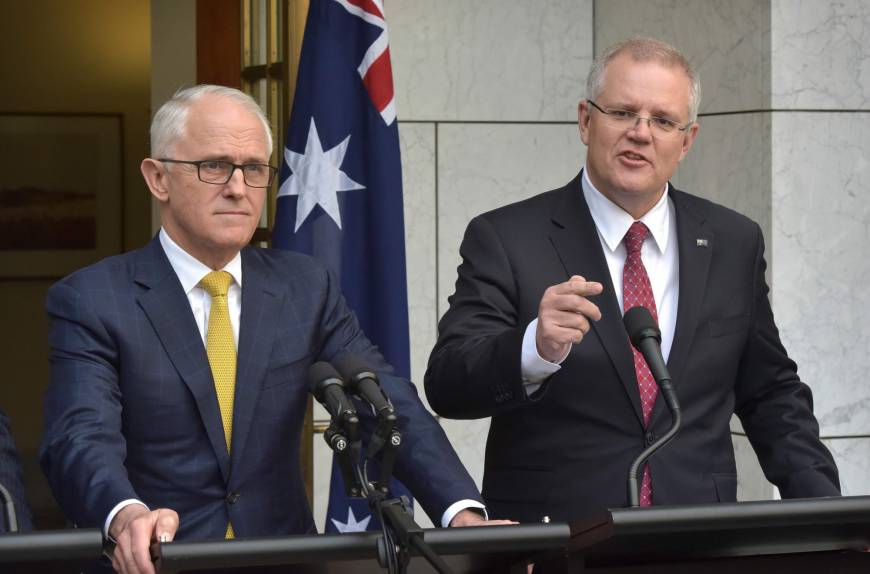 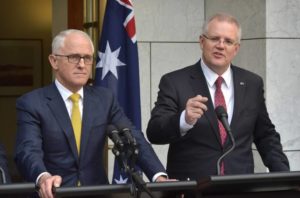 SYDNEY – Evangelical Christian Scott Morrison, who emerged as prime minister after a bun fight in Australia’s ruling party Friday, is an ambitious man who has always dreamed of the top job.

Behind the scenes of the battle for the leadership of the Liberal Party that erupted this week between ousted Malcolm Turnbull and right-wing former policeman Peter Dutton, Morrison was quietly canvassing support among his colleagues.

The hard-line former immigration minister, who took credit for “stop the boats” — a harsh policy to prevent asylum-seekers from entering Australia at its sea ports — billed himself as a man of faith and family who could get things done.

The son of a policeman, Morrison — known as “ScoMo” — becomes Australia’s seventh prime minister in 11 years, replacing a man who became the latest in a long line of leaders knifed in the back by their allies.

He is widely regarded as a conservative who respects moderates and is well placed to heal the civil war within the party.

Until Friday Morrison was treasurer, the most coveted government office after prime minister, and was regarded as the best economic manager among the candidates.

He had told colleagues that he would not run for party leader against Turnbull, so Turnbull’s decision to quit meant Morrison could not be accused of disloyalty.

The 50-year-old former tourism marketer is passionate about his Sydney Pentecostal church and his local Rugby League team, the Cronulla-Sutherland Sharks.

Morrison presided over Australia’s economy as the government sought to return the budget to surplus and simultaneously cut personal income and small business taxes.

On social issues, Morrison has stood to the right of the more moderate Turnbull, and opposed the legalization of same-sex marriage last year.

But he has also tried to soften his image, appearing on a cooking-with-politicians series that airs on national broadcaster ABC.

As for criticism of his controversial “Where the bloody hell are you?” advertising campaign in 2006, when he was managing director of Tourism Australia, he told the Sydney Morning Herald in 2012, “It fell foul of the latte elite.”

His stealth candidacy reflected aspirations he has had since he entered Parliament in 2007, representing the Sydney seat of Cook — one of the country’s most socially conservative and least multicultural areas, and the site of Australia’s last race riots.

Morrison rose to public prominence when the conservative coalition government was first elected under Prime Minister Tony Abbott in 2013, becoming the minister who stopped asylum-seekers from attempting to reach Australian shores by boat.

Australia uses the navy to turn boats back to Indonesia or banishes refugees to remote immigration camps on the poor Pacific island nations of Papua New Guinea and Nauru.

The policy has been widely condemned as a callous abrogation of Australia’s international obligations to help refugees.

Morrison explained his deep belief in the righteousness of crushing the people-smuggling trade and preserving the safety of people who board rickety boats to take the long and treacherous voyage to Australia.

But his empathy came under question when he criticized a former government’s decision in 2010 to pay asylum-seekers to fly from a remote Christmas Island camp to Sydney to attend funerals after 48 died in a boat disaster.

Morrison has a reputation as a power broker within the Liberal Party whose support has been crucial to previous Liberal Party leaders.

In his first speech to Parliament in 2007, Morrison said: “So what values do I derive from my faith? My answer comes from Jeremiah, chapter 9:24: I am the Lord who exercises loving kindness, justice and righteousness on Earth; for I delight in these things, declares the Lord.”

His immigration policy was credited with eliminating sea-borne arrivals. But it also attracted fierce criticism, fueled by Morrison’s refusal to release details of the military operations to turn back boats, sometimes to countries with dodgy human rights records.

Conditions in the camps on Manus Island in Papua New Guinea and on Nauru were slammed by rights groups, with some asylum-seekers languishing there for years.

Born May 13, 1968, in the beach-side Sydney suburb of Bronte, Scott John Morrison was the younger of two sons, whose parents ran church youth programs.

Morrison himself was an active church member, and met his wife, Jenny, as a young teenager through the church. The pair married when he was 21.

It took 18 years and multiple rounds of IVF before the first of two children was born. Morrison dedicated his maiden parliamentary speech to his daughter, Abbey Rose.

Morrison worked in the tourism sector at home and in New Zealand before being selected to contest the seat of Cook in 2007.

He credited his win to the “most significant influences on my life — my family and my faith.”

After serving as shadow immigration minister, Morrison moved straight into the government job when the Liberal Party took power in 2013.

A short stint in the social services portfolio followed, before he took over the Treasury when Turnbull became leader in September 2015.

Here are some of his remarks on key issues:

As immigration minister: “What you have to do in this portfolio is just be very comfortable in your own skin about the decisions you’re taking and why you are taking them. And I am.” — November 2012, Sydney Morning Herald

Faith in politics: “In my own church like in many others, we refer to Australia as the ‘great south land of the Holy Spirit.’ Separation of church and state does not mean the inoculation of the influence of faith on the state.

Trade war: “No one wins from a global trade war and that statement is more true today than at any other time in global economic history.

“There’s some legitimate issues that have been raised by the U.S. and those things can’t be dismissed simply because of the nature of the way these issues are unfolding.

“While some may criticize how they are doing that it doesn’t take away from the real issue that sits there.” — July 2018, Australian Financial Review

Chinese acquisition of assets: “My preliminary view is that the foreign investment proposals put to me for this transaction are contrary to the national interest, in accordance with the required provision on the grounds of national security.

This was “not a country-specific decision” — August 2016, Australian Financial Review

China relations: “China and Australia have a very practical and strong relationship. Remember, we were the government that negotiated in completing this China-Australia free trade agreement and that agreement has been a real boom in the Australian economy and we will continue to have very strong economic ties with China. They are a big customer of ours and we’re a big customer of theirs.” December 2017, press conference

Gay marriage: “People who have strong religious views, they have also been subject to quite dreadful hate and bigot speech as well.” — June 2016, ABC, on the risk that the gay marriage plebiscite would foster hate speech.

Coal industry: “This is coal. Don’t be afraid. Don’t be scared. It won’t hurt you. Those opposite have an ideological, pathological fear of coal.” — February 2017, in Parliament.