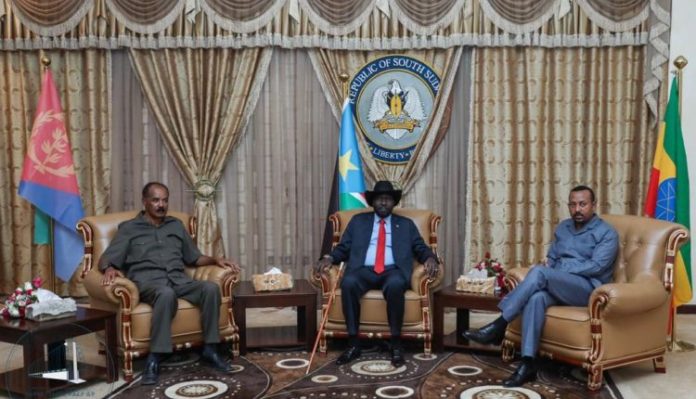 ADDIS ABABA, Ethiopia —Leaders of Ethiopia and Eritrea paid an official visit to South Sudan on Monday in an effort to take another step towards the regional integration.

Regional security and creating tighter economic ties among the countries in the region topped the agenda of the daylong meeting, a diplomatic source told Anadolu Agency.

The agenda of regional integration, according to the diplomat, “[…] has been in full-swing and it involved the horn of Africa nations of Ethiopia, Eritrea, Djibouti, Somalia, Kenya, Sudan and South Sudan”.

A communique issued following the meeting also said: “The three leaders focused on the need to advance regional integration.”

[To] that end, [they] agreed to task their foreign ministers and other relevant government agencies in the three countries to work out the common projects that will facilitate the attainment of the goal of regional economic integration and shared prosperity,” read the communique posted on the website of the South Sudan’s Presidency.

The three leaders also agreed to work together towards the consolidation of peace in South Sudan, it added.

Since gaining the power in April, Ethiopia’s Ahmed spearheaded an intense diplomatic shuttles aimed at enhancing regional integration as well as peace and security.

In September, Eritrean, Somali and Ethiopian leaders met in Asmara, the Eritrean capital, where they agreed to launch a vigorous high-level campaign towards regional integration, the diplomat said.

In August, Kiir was in a two-day visit to Asmara for talks with his Eritrean counterpart on bilateral relations and regional issues.

Earlier, South Sudan’s ambassador to Ethiopia James Morgan told Anadolu Agency that oil fields in the horn of Africa country were resuming operations after years of disruption due to civil war.

It came after a relative peace was established in South Sudan following the cessation of hostilities agreement between the warring parties on Sept. 12, 2018.