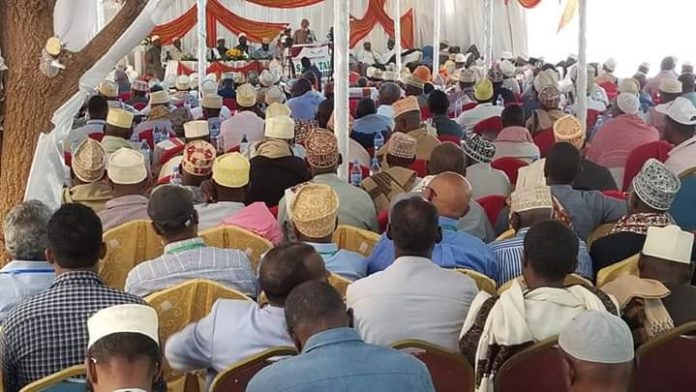 Today, The reconciliation and cooperation conference of two of Somaliland’s clans have opened in Burao, the administrative capital of Togdher Region.

The meeting named the Good Council conference brings together the clans of “HabarJeclo” and “Garhajis” in Burao.  It is hosted by the former and aims to achieve full reconciliation between the two clans.

It is attended by the traditional leaders of the two clans, led by their respective grand sultans, Sultan Abdillahi Sultan Ali and, Sultan Mohamed Sultan Abdiqadir and Sultan Osman Sultan Ali Sultan Madar.

Sultan Abdillahi Sultan Ali, the grand sultan of the host clan opened the conference. He opened that this was a traditional meeting that has no political agenda. However, he reminded the participants that Somaliland is looking up to them for leadership and plead with them to rise to the occasion.

Sultan Osman Sultan Ali thanked his counterparts for hosting the conference and proposing the reconciliation and cooperation conference. He said that the two clans had no qualms except for differences in politics which this conference decided to put aside.

Sultan Osman expressed his desire to see constructive cooperation between the two brotherly and clans and amicable relations. For that, he called for separating politics from clans’ relations and traditional leaders’ business.

Sultan Mohamud Guleid of the hosting clan on his part announced that this conference is to meant to address the divisiveness and bitterness left by the last election. He called for turning a new page in the relations of the two clans.

Now that we have that experience, I would like to call to consider everything in the past water under the bridge. Our best interest lies there. Our familial relation is better this way. Our religion calls for that.