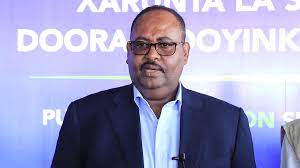 Speaking to MPs in a closed-door meeting, Deni said the new Somali President Hassan Sheikh Mohamud had not consulted him over the appointment of Hamza Abdi Barre as Prime Minister last week and accused the President of behaving badly following his unilateral decision.

The leader of the semi-autonomous region played a pivotal role in Mohamud’s resounding win in an election that pitted him against his predecessor Mohamed Abdullahi Farmajo last month. His support turned the tide in favor of the new President in the vote that ended Farmajo’s turbulent reign.

The powerful leader was seeking to be named as the Prime Minister of the Federal Government but Mohamud rebuffed his bid, promising that he would engage in consultation with him over who should hold the post.

Puntland leader told the MPs that the new Somali President is not competent to overcome challenges facing the country at this testing time, adding that the public will see his failure to deliver on promises within 120 days.

Speaking on a power fight in his relatively stable region, Deni vowed that he would ease tensions with his deputy Ahmed Karash and alleged that there were MPs who were adding fuel to fire by planning a motion of no-confidence against his government.