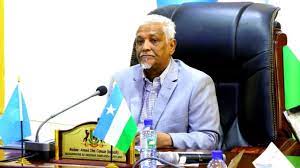 Vice President of the northeastern semi-autonomous region of Puntland Ahmed Elmi Osman on Wednesday fired three key ministers allied with the regional leader, weeks after fresh power fight surfaced over a decision by Saeed Abdullahi Deni not to step down amid his ongoing campaign for Somalia’s president.

In a decree issued overnight that has immediately come into force, Ahmed sacked the Ministers of Finance, Security and Interior, who were all considered key allies of the regional President.

It comes weeks after Saeed Deni ordered regional government institutions not to pay heed to decrees issued by his deputy and take orders directly from him as the two leaders still remain locked in an escalating dispute over who has legitimacy to rule after the President announced his candidacy for Somali President and launched his campaign in Mogadishu.