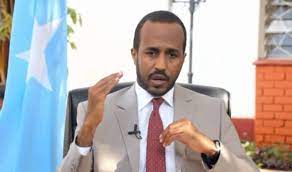 On Thursday, Puntland’s Security Forces under the instruction of its regional president Abdullahi Saed Deni shunned delegation which was due to receive Somalia’s Minister of Planning Jamal Hassan at Garowe Airport. The minister was enroute to his constituency in Dhahar, Sanaag region arrived at the airport but without a receiving a delegation after his team on the ground was barred from accessing the airport. A confrontation was reported to erupt between Puntland security forces and minister’s team from Dhahar. The team from Dhahar had come to Garowe in order to pick the minister. The government forces stationed at the airport attempted all they could to prevent the minister for leaving for Dhahar but he later on managed to depart for it. Jamal is a close ally of the outgoing Somalia’s president Farmajo who is not in agreement with Deni whom reliable sources said that he attempted to derail his re-election. Jamal will be seeking re-election by his sub-clan in Dhahar in the upcoming Lower House elections in Somalia.