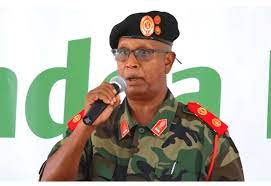 Our national army does not like war, but if forced, they know how to respond, he says

Commander Nuh who held a press conference yesterday in Hargeisa in response to a statement by the commander of the Puntland army called on them to desist from the misleading statements they are making in the media, and the national army is ready to defend the borders of Somaliland.

Commander Nuh said that recently there have been threatening statements from the leaders of Puntland and the latest one is the commander of the Dervish army, Abshir Jama.

He noted that Somaliland’s forces and the government’s policy is to maintain peace with neighboring countries, such as Puntland, but “unfortunately, Puntland’s political and military leaders always direct insulting statements to us, which Somaliland rarely respond to”.

He added that, “We are aware that the leader of the Puntland Dervishes threatened to start a war against Somaliland, our national army does not like war, but if forced to, they know how to respond”.

He called on the leaders of Puntland to stop their threats against Somaliland and preserve peaceful neighborliness.