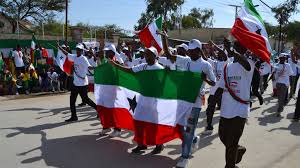 Somaliland Republic is not breakaway or secessionist as the foes of its independence falsely claim. If Nyanza Province of Kenya or Arusha Region of Tanzania or Puntland province of Somalia secedes or breaks away from their own respective countries, they would definitely qualify to be secessionists, separatists or breakaways and that would change or shift the colonial borders of Africa inherited from European colonial powers thus creating instability and political unrest in the continent of Africa as those provinces share history, colonial borders, independence and recognition with their own motherlands, a reason to deny them recognition. Somaliland and Somalia were two newly independent separate countries sharing union in 1960. The independence and recognition of Somaliland would not shift or change African colonial borders for being based on British Protectorate Borders that make it qualify for diplomatic recognition.

Whether displeased or not, Somaliland will not come back to the destructive, atrocious, unilateral union with Somalia shared hastily on July 1, 1960 and then withdrew from it in 1991 after devastating civil wars taking place between Somaliland and Somalia (1982-1990) reclaiming its independence achieved on June 26, 1960 as unions are dissolvable but independence is not dissolvable.

Unions, federations and confederations are dissolved after sharing countries have strong disagreements over the fairness of the system or even engage in wars like Somaliland and Somalia. Senegal and Gambia shared federation in 1982 and dissolved it in 1989. Egypt and Syria shared union in 1958 and dissolved it in 1961. Federal Yugoslavia broke up into independent republics in 1995 after devastating ethnic cleansing civil wars. Eritrea became independent country of Ethiopia in 1991. After unions or federations fail and dissolved, parting countries retain their original independence and recognition they had before and Somaliland is not exception.

Like Somalis, Arabs share ethnicity, religion, culture, color, traditions etc but , at the same time, disagreed to share union or federation. White Arabs have nearly eighteen countries (18) while Somalis have five (5). The Jordanian or Iraqi man or woman can not enter Egypt without legal documents to get job or rank or any other Arab country. Every Arab country is independent of other Arab countries with each country having their independent state, government, flag and recognition based on their colonial borders. Greater Arab, like Greater Somalia, does not work in the Arab World to enter another Arab country. Citizens of Morocco or Libya are not citizens of Greater Arab but they are citizens of their own countries and Somalis are not different from them. Citizens of Somaliland or Somalia are not citizens of greater Somalia.

European Colonial Borders define nationalism, independence, statehood and diplomatic recognition of each country in Africa, Asia, and Arab World. Somaliland is not an exception. It inherited its Internationally recognised unique borders from Somaliland British Protectorate as any other African Country did it from its colonising power.

There are no clan or tribal borders in Africa but there are state or national borders only. Borders of countries are based on land, not on clan lineage or tribal origin. The territory, statehood and recognition of each African country is not defined by indigenous, African-drawn borders or by tribal lineage boundaries but defined by colonial power-drawn borders. The political map of Africa showing African countries was made by Europe, not by Africans. Tribalists or unionists who think that they can divide Somaliland territory or bring it back to the doomed union ignoring its internationally recognized borders are like one trying to fill bottom-cracked barrel with water. Any entity which tries to claim parts of Somaliland to change its borders on the basis of tribal lineage or any country which tries to dismember Somaliland territory for aggression must be confronted to defeat such hostile attempt.

It would be good for Somalia and Somaliland to recognize each other to become two sisterly twin states in the Horn of Africa supporting each other and exchanging trade, cultural, travel, academic, sports, military alliance etc like the Gulf countries for prosperous, better future for their peoples. With such interactions and cooperation between the two countries in all fields, sovereign Somaliland could also help Somalia recover and revive from prolonged instability. Instead of becoming two hostile nations in the Horn of Africa with avoidable occasional skirmishes, border closures, deportations, threats, military buildups, armed confrontations etc, they should be peaceful independent twin countries.