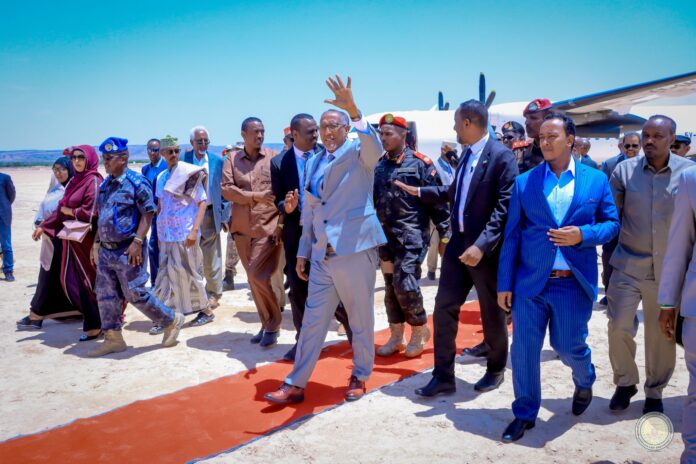 The President H.E Musa Bihi Abdi was welcomed in Erigavo town. The head of state was on an official visit to inspect different development projects initiated by the Kulmiye administration.

Since coming to power, the Kulmiye-led administration has laid the foundation of various infrastructure programs for instance the Burao – Erigavo Road and Mayd jetty.

The president’s delegation comprised the speaker of the House of Elders Hon. Suleiman Mohamoud Adan and the parliamentary Speaker Hon. Abdirizak Khalif Ahmed.

The presidential delegation was received at the new Erigavo Airport by top leaders of Sanaag region led by the regional administrators and local government officials. Residents of Erigavo were very happily welcomed the president

The delegation passed through the main streets of Erigavo whereby locals stood in line to welcome the president, singing songs of praise for the head of state.

He cut the ribbon ushering the opening of the new premises at the regional Presidency. According to sources, the new development projects were funded through the government budget.

Traditional elders of Sanaag thanked the president for promoting development in the country.

The provincial commissioner of Sanaag region Mr. Ahmed Abdi Muse thanked the head of state for initiating development projects in the regional capital.

Also addressing the gathering was Erigavo mayor Ismael Haji Noor who briefed the president on the general situation of the County.

The president thanked the people of Sanaag region for supporting his administration and for the warm welcome.

The president is on a working visit to Erigavo, according to itineraries he will meet with traditional elders of the region to discuss ways to move forward.