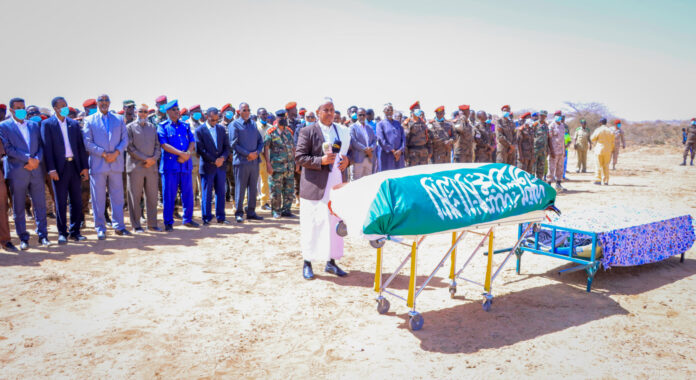 The President of the Republic of Somaliland H.E. Muse Bihi Abdi attended a funeral in honour of the Commander of the Presidential Guard, the late Colonel Muse Elmi Farah at Baqic Cemetery, North of Hargeisa.

The burial was also attended by the First Vice-Speaker of the House of Representatives, some national political party leaders, various military service commanders, members of the cabinet, relatives of the deceased, and other members of the public, and spoke in-depth about the history of the deceased and his role in the formation of the army.

Deputy Speaker Hon. Said Farah Mire (Girre), Ministers of Interior, Hon. Mohamed Kahin Ahmed, Religion and Endowment Sheikh Abdirizak Ali Albani, WADDANI Party presidential candidate, Mr. Abdirahman Mohamed Abdillahi (Irro ), the former Minister of Interior, Mr. Mohamed Nur Arrale (Duur), former Ambassador of Somaliland to Kenya, Amb. Bashe Awil Omar and some of the relatives of the deceased said that he was a hard worker, had a great history in the army, was respected and respected by the people.

The President prayed for God’s blessings on the soul of the deceased. He described the late colonel as one who worked hard, took part in the struggle for reasserting Somaliland’s independence, and was very humble and polite.

He described the deceased as an expert on military affairs, who had left the country and played a key role in the formation of the Somaliland National Army, held various positions, and was the Commander of the Presidential Guard of the Republic of Somaliland at the time of his death.

The President prays to God to shower mercy on the deceased, the Somaliland National Army, the Presidency, intellectuals, elders, scholars, family, relatives, friends and the people of Somaliland and give them patience and faith.