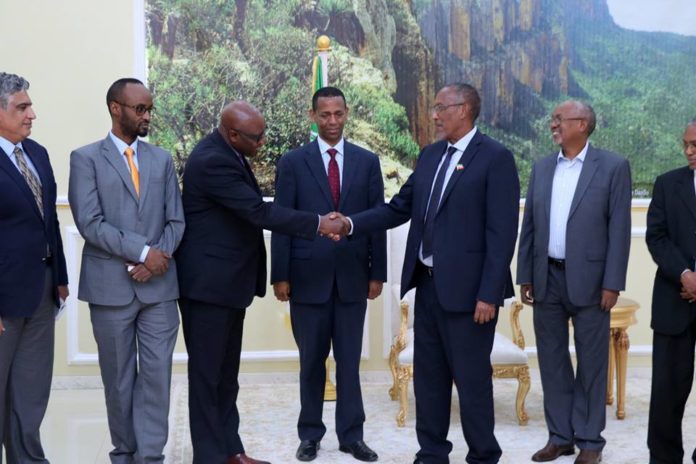 The president of the Republic of Somaliland H.E. Muse Bihi Abdi has received high level delegations from IGAD and UNSOM.

Led by IGAD’s Special Envoy Mohamed Ali Guyo and UNSOM’s Representative, the two sides had a closed door meeting which resulted the discussion of a wide range of issues. According to the Presidency Spokesman, two sides discussed to the hastening of impeded humanitarian access, strengthening regional serenity and bolstering the bilateral ties between the two sides.

On the other hand, the delegation has appreciated President Bihi for his unwavering dedication to enhancing the relations of Somaliland towards the outside world.

Flanked by the VP of Somaliland H.E. Abdirahman Zeili, recently appointed FM of Somaliland Mr Faraton Minister of Finance Saad Ali Shire and Somaliland’s envoy to IGAD Abdullahi Mohamed Duale, the incumbent president has thanked IGAD and UNSOM for their tireless efforts in enhancing the regions tranquility and stability.