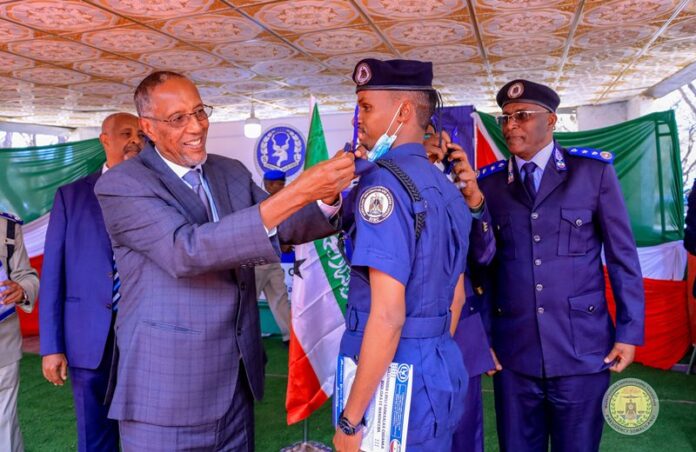 The Head of State H.E Musa Bihi Abdi was the chief guest at a graduation ceremony of 253 cadets drawn from the Police, Coast Guards and the Immigration department. The officers had completed an eight-month training.
The passing out parade was held at Mandera Police Academy. The president was accompanied to the graduation ceremony by some members of the cabinet, MPs, Chiefs of different sectors of the armed forces, training officers and other distinguished guests.

The first to speak at the podium were top training officers from the Police Academy and top police officers in charge of training program. They all attested to the different stages the officers passed through to attain the ranks of cadets. They congratulated the youthful officers
and acknowledged their future as role models of different branches of the armed forces in the country.

They in unison congratulated the young officers and urged them to apply the knowledge learnt in good use in their work and their community.
Speaking at the graduation ground, the minister of internal security Hon. Mohamed Kaahin Ahmed praised the youths for their graduation and reminded them that the nation had invested heavily on them to don on their lapels laurels  and ranks on their shoulders.

The president concluded the passing out ceremony with a congratulatory message and words of counsel. He also sent best wishes to the young officers for their achievements.
The head of state categorically praised the young girls for outsmarting the young men to don officers’ rank at a tender age as a result of their perseverance and determination.

The commander-in-chief advised the young officers to listen and follow the commands of their superiors. He added that they had reached the pinnacle of their armed forces goals and aspirations.
“I’m elated so much and congratulate all of you for your achievements, whatever counsel and knowledge you have received May Almighty All Powerful Allah make them beneficial to you. I also acknowledge and congratulate the young girls who have participated in the training”, stated the president.
The head of state noted that a decade ago the girls were very shy in joining the armed forces, however this time round they have occupied the front row pavilion.

The president highly lauded and thanked Captain Ahmed Iman Elmi (Tima-jilic) whom for five decades trained many officers, some of whom are Generals sitting amongst the congregation.

President Bihi informed him that the government is aware of their sacrifices.
Finally, the president bestowed ranks to the young men and women officers. They were pinned with one and two pips on their shoulders, signifying their ranks.