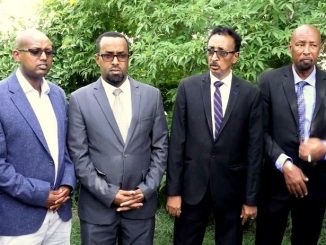 We have high hopes of holding elections in time, they say as they resume stalled dialogue

In what the political stakeholders described as a “confidence building” round table meeting, the three official political parties are geared to resume dialogue in order to pave way for the holding of the long-awaited parliamentary and civic elections.

They expressed high hopes that the elections would be timely held as they continue pondering over their differences and in conciliatory move address the bones of contentions therein.

The meeting held at the Presidency yesterday followed a call made by the Head of State H.E. Musa Bihi Abdi on 26th June Independence celebrations to the political parties to meet on Saturday 19th June 2019 (yesterday) such that they may seek consensus to facilitate the holding of the upcoming elections.

The electoral processes hit a bottleneck when the opposition Wadani party declined to work with the existing National Election Commissioners calling for their ouster, something that didn’t go well with the other parties hence the elections was threatened to stall.

The meeting yesterday which was graced and chaired by the Vice President H.E. Abdirahman Abdillahi Ismael brought together the top echelons of the political parties.

The two secretaries general of Wadani and Kulmiye flanked both sides of UCID representative Mohammed Abdi Abyan who spoke on behalf of the political stakeholders and sounded high hopes of realizing the balloting day to be held as scheduled.

He noted that their confidence building meeting was to restart the resumption of the talks which had since stalled hence described the outcome of the preliminary roundtable as quite positive.

He revealed that the main agenda was the holding of elections and stated that all the three political parties were united in their commitment that they wanted to see to it that the process culminates in a successful 13th Dec 2019 voting exercise.

Mr. Abyan said that their talks was based on qualitative mature dialogue which put on the course their objectives aptly.

He said they debated articulately and the tentative outcome of the preliminary talks was excellent. He noted that the talks would continue and the expectations for fruitful outcome was very high.