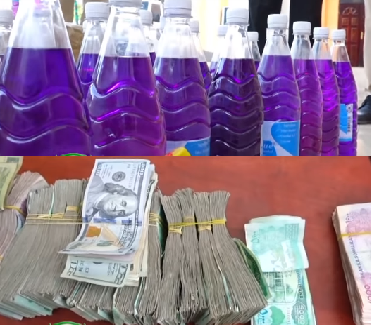 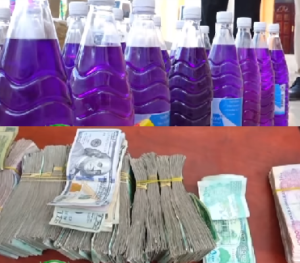 HARGEISA–Somaliland police have impounded a large cache of drugs and alcohol money proceeds following an operation to smoke out criminals in the country. The deputy commissioner of police Mr. Abdirahman Liban Fohle and the police spokesman Mr.Faisal Hiis also confirmed that some carjackers were also caught in the police dragnet. Police confiscated large amount illicit money which was in Somaliland Shillings, Ethiopian Biir and US dollars denominations.

The deputy commissioner of police revealed that they had apprehended 10 carjackers who were incarcerated at Hargeisa’s Koodhbuur Police Station.
He went on to confirm that the suspect will be arraigned in court after the investigations are complete. “In our operation to rid the city of thugs we arrested many youths who rob city residents of their mobile phones and valuables. My men also arrested drug peddlers and alcohol sellers and confiscated their illegal cargoes. As you can see here are the 81 liters of spirits and bhang which are used to destroy our youths. This consignment is used to turn law abiding citizens into dare devils. It is also the source of immorality within the populace.”
Brigadier Fohle stated.

Police spokesperson Colonel Faisal Hiis said “You can see this money is the proceeds of the deadly cargo. We have 8,300,000 Somaliland Shillings, 1100 Ethiopian Biir and 362 US dollars which we found in the possession of the peddlers. They shall appear before a court of law to answer the charge of selling a prohibited substance.”