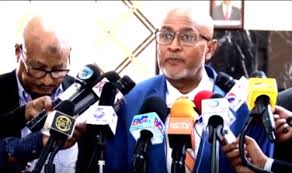 SL House of Elders on Tuesday endorsed the election timeline set by the National Electoral Commission along with the national political parties.

The two main opposition parties namely UCID & Wadani have welcomed the house of elders endorsement on the election timeline.

The two opposition groups separately welcomed the approval of the house of elders for the election date.

Wadani party chairman Abdirahman Irro said that this coming election will allow young aspiring politicians to be elected and others will have the opportunity to cast their votes in the history of Somaliland elections.

The Deputy Secretary General of Welfare and Justice Party (UCID), Abdinasir Yusuf Qodah termed the move as the last resolve which ended a protracted dispute between the political parties over the timing of parliament and local council polls.

On Tuesday, the House of elders agreed that the country is gearing up for parliamentary and local council polls to take place on 31 May, 2021 as proposed by the president along with the electoral commission as well as the political parties.