Omaar Group promised to build a Fish Factory in Somaliland

Berbera- Omaar Group and National Oil company (NOC) have laid the foundation stone for a multi-million-dollar project to build an oil and LPG gas terminal and have also promised to build a fish factory in the country. 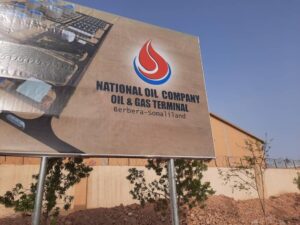 In a ceremony attended by the Minister of Commerce, the Governor of Sahil, the Mayor of Berbera, and officials from Omaar and the National Oil Company (NOC) laid the foundation stone for the construction of fuel storage terminal funded by both Omaar Group & NOC.

The new oil storage terminal will have 230 thousand M3 capacity, where the first phase will be to build 100 cubic meter oil and liquefied petroleum gas (LPG) terminals and the project will meet the country’s fuel needs.

Omar Masri, chairman of Omaar Group in the Sahil region, and Mohamed Ali Muhumed (Mohamed Ali), chairman of NOC, said the project co-sponsored by Omar and NOC would meet the country’s oil needs.

“The private NOC company will meet the energy demands and the country’s oil reserves. I hope the construction of the terminals will begin soon.” Said the Chairman of Berbera of Omaar Group.

Mohamed Ali added that in the Horn of Africa region, which is in dire need of oil reserves, NOC is investing a modern oil terminal enough for oil and gas reserves lasting a year, he said.

“NOC’s oil and gas reserve terminals will meet energy demands of the country and the Horn of Africa region.”

The Berbera Port Manager, the Berbera Oil Terminal Manager, and the Mayor of Berbera District all welcomed the investment by Omaar Group and NOC to build the oil reserve terminals, which will also create jobs for the citizens of Somaliland.

Minister of Commerce Hon. Mohamed Hassan Sa’ad (Sajin) who spoke at the event praised Omaar Group & NOC for investing in the oil and gas reserve terminals, which are of great importance to Somaliland, and praised Omaar’s promise to set up a fish factory.

Minister Sajin said he would commend Omaar Group for setting up a fish factory in the country.

The trade deficit between Somaliland and Ethiopia is huge, we import a lot from Ethiopia, but we do not export anything, said Commerce Minister.
We complained against Ethiopia for the huge exportation, but their response was if you have a local product to export we will buy? We do not have locally sourced products.
The world of trade is collapsing, every country would survive on locally produced food, I call on the country’s businessmen to initiate commercial farming, for the survival of our people.