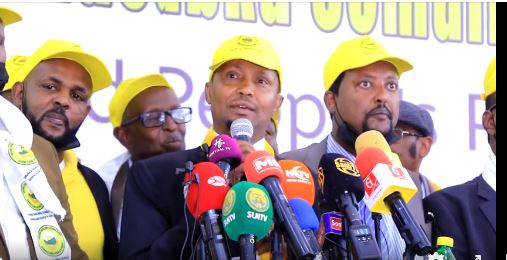 A new political party has been unveiled in Hargeisa, known as Somaliland People’s Party (SPP). The People Party new chairman Mr. Suleiman Haglotosiye unveiled the manifesto of their party at a Hargeisa Hotel.

Speaking to the press during the launch, Dr. Suleiman Essa Ahmed aka.Haglatosiye stated that their entity will fight for the eradication of tribalism in Somaliland political scene.

Somaliland People’s Party founder revealed that he was a member of Somaliland’s Diaspora Community organization which used to be united but, as he claimed, has however been disintegrated by tribalism. The party boss stressed, “Somaliland People Party belongs to all the people of the country and no tribe or group can claim ownership”.

He went further to reveal that this is the only way Somaliland could gain international recognition. The former minister of health in president Silanyo administration informed the current opposition parties that the will of the people will prevail in selecting new political entities to represent them.

Since the announcement of registrations of new political parties in Somaliland, local politicians have been busy building political alliances and unveiling new parties.