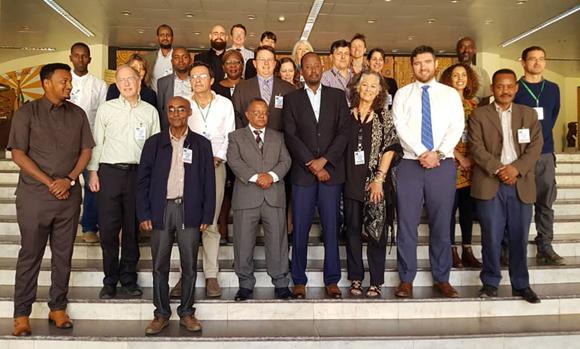 Cheetah Conservation Fund (CCF) is expanding its capacity in the Horn of Africa, building on its success to curb cheetah trafficking through Somaliland by engaging the authorities and working with local conservation groups. This week the Namibia-based conservation group announced it has formed an alliance with Ethiopian national and regional government conservation agencies to assist them with capacity building in law enforcement to combat wildlife crime.

At 1.1 million square kilometres, Ethiopia is roughly 40% bigger than Namibia, the latter deemed the world’s cheetah capital. Ethiopia’s vast territory is home to a significant number of wild cheetah, forming one biome with Kenya’s northwest and Somalia’s western region.

In theory, this large territory should enable cheetah to thrive but it also means that it serves as a feeder area for wildlife criminals who catch cheetah cubs in the wild and then smuggle them through Somaliland to be shipped to the Arabian peninsula. Here they are much coveted as pets for ostentatious households, but sadly many of the trafficked cubs die while they are smuggled and the vast majority die within one year after being sold to a rich Arab household.

To block the smuggling route, CCF has engaged the Somaliland authorities, assisting them with detection and prevention, and confiscating cubs when smugglers are caught. It also helps build capacity in Somaliland to charge wildlife criminals and get them convicted in a court of law.

From their field work in Somaliland, CCF soon realised that a large number of the smuggled cubs originated from Ethiopia. This lead to a series of meetings with Ethiopian authorities to introduce CCF’s law enforcement capacity-building project, LICIT (Legal Intelligence for Cheetah Illicit Trade), to the local agencies tasked with conservation and protection.

The first success of this new collaboration came earlier this year when three cheetah cubs were confiscated from criminals. Working closely with the Ethiopian Wildlife Conservation Authority and the Somali Regional State Illegal Wildlife Trade Task Force, CCF helped facilitate safe transfer of the three month-old cubs to the Ensessa Kotteh Wildlife Rescue, Conservation & Education Centre operated by the Born Free Foundation. The siblings were intercepted from wildlife traffickers near the Ethiopia Somaliland border town of Kebri Beyah in February along with a third cub that since died.

CCF said it estimates that about 300 cheetah cubs are taken from the African landscape per year to supply the illegal pet trade. It it also estimated that there may be as few as 300 breeding adults in the whole Horn of Africa.

“Cheetahs are not pets”, said Dr Laurie Marker, the CCF Executive Director. “They are apex hunters; their job is to help feed other wild species on the landscape. Every cub removed from the landscape not only puts the species closer to extinction, it creates a harmful, rippling impact for other wild species. Please help us stop the illegal trade in cheetah.”