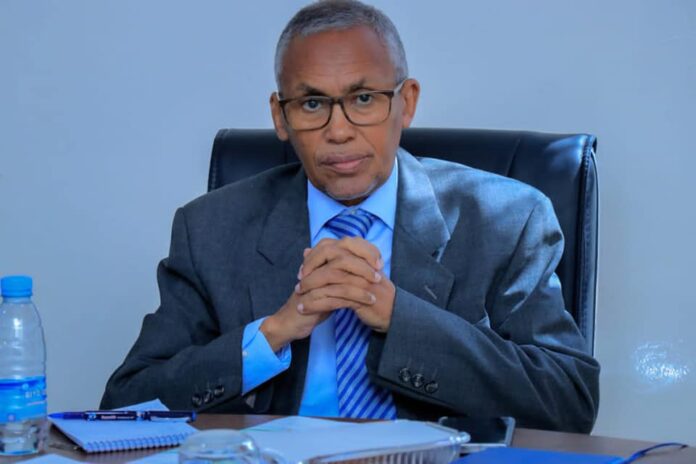 A meeting to evaluate the performance of the Departments of the Ministry of Financial Development for the three months of July-September 2022 was held at the General Accounts Office hall in the city of Hargeisa.

The purpose of this meeting, which is held every three months, was the assessment of the performance of each department.

This focuses on what has already been, what has not been achieved, pros and cons surrounding the tasks, challenges etc as far as their targeted plans were set. Each head of a department presented his/her case.

The evaluation meeting presided which was by the Minister of Finance Hon. Dr. Saad Ali Shire, was attended by Deputy Minister Hon. Rooda Jama Ilmi, Director General of the Ministry Mr. Mohamed Abdi Gurhan, the Accountant General Mr. Ahmed Daoud Gedi, and all the Directors of the Departments.

In his opening speech, the Minister of the Ministry underscored the importance of upholding accountability in the treasury as being their main service to the nation as a whole.

In the performance report of the departments, it was said that generally good progress has been made in terms of the implementation of the financial management reform program such as; the use of modern automation systems, Financial Management Reform, Taxation, Customs, Taxpayer Awareness and Strengthening, Compliance, Budget Management and Expenditure, Procurement, Personnel Reorganization, economic development policies and the promotion of domestic production especially during a difficult time in the world and in the region, there are difficult inflationary conditions.

The Ministry of Finance has an annual plan, as well as a Five Year Strategic Plan that is the map or path for each section and department to adhere to in running a business.

Hon Dr. Saad Ali praised the officials of the departments for the responsible performance of their duties and urged each of them to respectively take responsibility for the implementation of what is incomplete in the remainder of the current year.