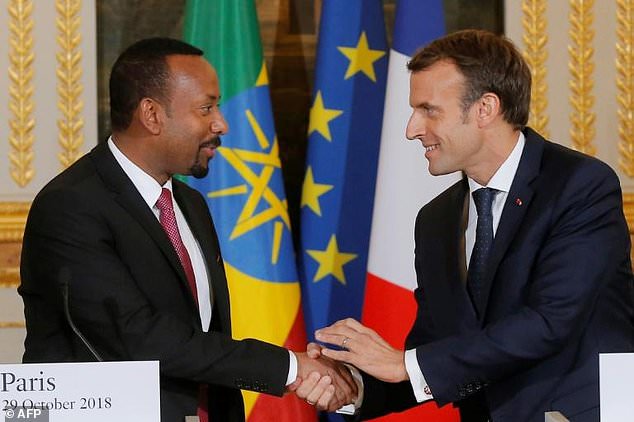 Abiy, 42, has won global praise for forging peace with neighbouring Eritrea, announcing economic reforms and reaching out to dissidents, but is grappling with bloody ethnic disputes which have displaced some 1.4 million people.

Macron offered “all my support and that of France” in reforming Ethiopia and “in calming domestic tensions”, telling Abiy at a press conference in Paris: “You have here a country which loves yours but also admires the transformation you are carrying out”.

“I know how much he has risked to see these reforms through and how much these reforms are fraught with difficulties, but also how much Prime Minister Abiy Ahmed has chosen a courageous path,” Macron told reporters.

“The political, economic, social and cultural transformation that you are in the process of carrying out and that you’ve committed to in Ethiopia is unprecedented,” added Macron, another leader keen to present himself as a reformer.

Abiy vowed to tackle the violence gripping Ethiopia, saying it would be resolved through “greater peace-building in the whole country”.

“The communal conflicts cannot undo the reform agenda,” he added, arguing that economic reforms would help end the violence by bringing greater prosperity.

“The reform process is contributing to greater peace in the country,” he said.

Analysts see no single cause for the killing that has stretched from the countryside to the capital and left scores of Ethiopians dead.

But they say Abiy, who inherited a vast, ethnically diverse nation used to the iron-fisted rule of his predecessors, has his work cut out for him as he seeks to impose his leadership without tipping into authoritarianism.

French officials signed a string of cooperation deals with their counterparts from Africa’s second most populous nation, in areas ranging from transport and energy to culture.

French experts are set to advise Ethiopian officials on how to open the national palace, dating back to the rule of Haile Selassie who was emperor until 1974, to tourists.