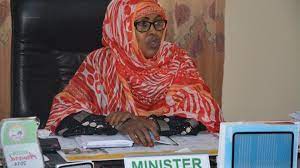 Shukri Haji Ismail Mohamoud, Somaliland’s minister of environment and rural development, still remembers that day in 2013 when she asked her staff. “Why are people taking cheetahs? And they said, because they are selling. Selling! They are not goats; they are not sheep; they are not camels. Why are they selling the cheetahs?”

Mohamoud learned that cheetah cubs were being sold by nomadic pastoralists to traffickers, who were smuggling them out of Somaliland into the Arabian Peninsula to sell as pets.
Upon being further informed that this trafficking activity was not illegal due to the lack of policies and regulations, Mohamoud quickly acted to update a forgotten bill.

Then, in 2016, Somaliland’s Forestry and Wildlife Conservation Act was enforced. Anyone who sells wildlife for profit will be sent to prison for at least 12 months with a huge fine.

Moreover, upon discovering that there were less than 7,000 adult cheetahs remaining in the wild, Mohamoud felt more compassion for the cats and exerted her best to protect them.

But Somaliland was still on its way to becoming a truly independent country, separated from Somalia. The law against animal trafficking was very new to the people, and even those in authority were having a difficult time implementing it.

Nonetheless, Mohamoud would not give up. And she kept on working iwth the interior ministry to carry out the law and stop wildlife trafficking.

Deputy Attorney General Mowliid Cabdi Muuse, who leads the Hargeysa region’s prosecution office, related that he dealt with at least five cheetah trafficking cases since the 2016 environmental law was enforced. There is a prosecutor who is devoted to environmental crimes.

However, police authorities were needed to be able to file the cases.

“We are trying as much as possible, working very hard, to provide security for wildlife,” explaiaoed Minister of the Interior Maxamed Kaahin Axmed. But there were many challenges like lack of resources and the vast ground that must be covered.

But despite the challenges and problems, Mohammod continued her advocacy, reaching out even to schools to raise awareness on the importance of cheetahs.

The people slowly began to respond. But Mohammod realized that the fight was not only in their land. Other countries with trafficking problems must also join hands in putting an end to it.

Yes, the minister stays hopeful. Solutions must be put in place in the countries where they’re found in the wild—and in the countries with people who want to own them as prestige pets. It’s at our peril, she says, to fail to see that stability in the natural world and in human affairs are intertwined.”