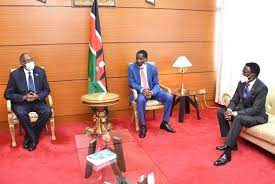 Kenya’s Foreign Minister Raychelle Omamo said on Friday her country had not delivered recognition to Somaliland and would treat it as a part of regional states in Somalia.

In a press conference in Nairobi, the Kenyan Foreign Minister stressed that Somaliland had not yet submitted an application for recognition by Kenya.

It comes days after the parliament of the United Kingdom held a debate on the recognition of Somaliland, a move which has been hailed in the break-away region, though it has triggered the ire of Somalia’s federal government.

On Saturday, mass demonstrations were held in the self-proclaimed state’s capital, Hargeisa in support of the UK parliament’s debate. Thousands of demonstrators, some holding posters depicting a British MP Gavin Williamson who had tabled the debate at the House of Commons, were seen in the streets.