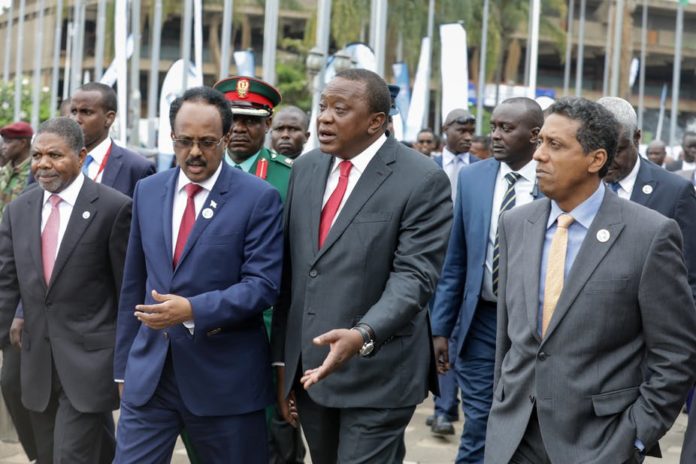 The borderlines separating Kenya and Somalia were first drawn in the late 19th century. Like everywhere else on the continent, this was the work of cartographers working for European colonial powers. Across the continent they replaced porous spaces in which people engaged openly across culture, language, religion, kinship, and ethnicity with straight-line geometrics.

East Africa was no exception. For ages, the borderlands in the Horn of Africa conformed to the adage:

Wherever the camel goes, that is Somalia.

Colonial border lines met with fierce resistance. In Kenya the line delineating the Northern Frontier District produced an immediate reaction, sparking the Shifta War soon after Kenya’s independence in 1963. The area is ethnographically dominated by Somalis.

The legacy of that unfinished business has now migrated to the Indian Ocean.

At stake is control over a 100,000 square kilometre triangle in the Indian Ocean proven to contain large deposits of oil, gas and tuna.

Lord Salisbury, the three-times British Prime Minister who presided“over a vast expansion of the British Empire in Africa”, once noted the absurdity of the line drawing undertaken by Europeans to accomplish the scramble for Africa. Colonial powers ceded

Lord Curzon, Queen Victoria’s Viceroy of India and the man who in 1905 split Bengal into hugely contentious and imperfect Muslim and Hindu areas, called the resulting cartographic Githeri

the razor’s edge on which hang suspended the modern issues of war or peace.“

European line drawing accomplished a kind of economic efficiency in pursuit of colonial administration. But it was indifferent to the huge diaspora and human drama provoked by bisecting and trisecting East Africa.

Winston Churchill as a British parliamentarian and before becoming Prime Minister, justified it in terms of Europe’s civilising mission. In 1907 he rode the 600-mile railway that had been built as part of Britain’s efforts to consolidate the East Africa Protectorate by connecting the port of Mombassa to Lake Victoria Nyanza. He marvelled in his 1908 travelogue,My African Journey, over the engineering masterpiece, which signalled to him

a slender thread of scientific civilisation … drawn across the primeval chaos of the world.

In fact imperial line drawing minted another kind of chaos. This chaos would pit Kenya’s post-colonial state building against Somali’s self-determination and identity politics while spreading tendentious seeds of division across the map of East Africa. Frontier fighting took hold in the Northern Frontier District, and has followed every kink and turn in the borderland, which now finds expression in a simmering dispute out into the sea.

Somalia versus Kenya at the World Court

In 2014 Somalia took Kenya to the Word Court after Kenya failed to attend a third round of delimitation talks.

Somalia wants its sea border to extend the frontier line of its land border in a southeast direction. It bases its claim on the equidistance principle derived from the United Nations Convention on the Law of the Sea.

Kenya claims the border follows along the parallel line of latitude directly east of its shared land terminus with Somalia.

Kenya has regarded the line parallel to the line of latitude as the border demarcation for almost 100 years. The line mimics the sea border maritime demarcation separating Tanzania and Kenya.

Kenya argued that the two countries had agreed in a 2009 Memorandum of Understanding to settle this dispute outside of the World Court, once the United Nations Commission on the Limits of the Continental Shelf had concluded its examination of separate submissions made by each coastal state.

Counsel for Somalia argued that the memorandum of understanding never created a binding commitment to an alternative method of dispute settlement.

In February 2017, the Court agreed with Somalia and proceeded with the case. Counsel for Somalia claimed that the court has never delimited a boundary on the basis of Kenya’s approach, nor are Kenya’s arguments supported by decisions of other international courts or arbitral tribunals. Rather, owing to its lack of confidence in the merits of the case, Somalia claims

Kenya is looking for a way to avoid the Court’s exercise of jurisdiction.

A few weeks ago, Nairobi abruptly recalled its ambassador to Mogadishu and sent back the Somali ambassador. Kenya’s claim: Somalia purportedly auctioned off shore oil blocks in the disputed sea region to European energy companies.

Diplomats are now working to describe the incident as something of a misunderstanding. European oil companies have also disputed the procurement of such licenses, fully aware that the case is sub judice and the outcome is anything but determined.

The bottom line is that Kenya and Somalia are intertwined and need one another.

Some analysts attribute the current diplomatic row to short-term political posturing as Somali regional and presidential elections approach in 2020. However, the longstanding tension over terrestrial divisions bodes ill for a settlement of the sea dispute as long as the adjoining states overlay the problems of colonial cartography with a firm commitment to eating their sovereignty cake and having it too.