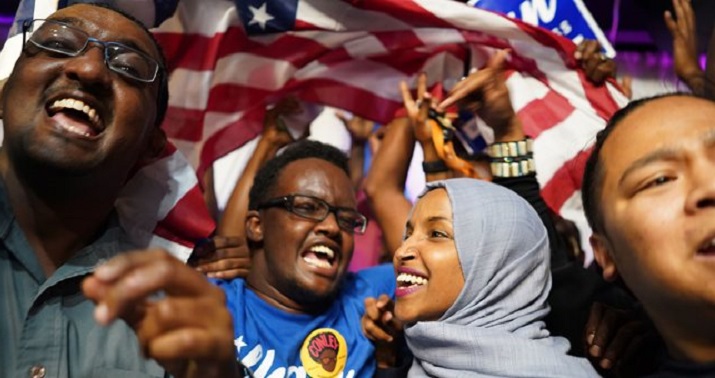 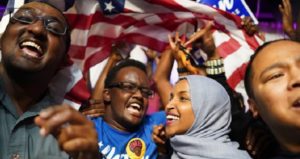 We’re a couple of days out from the primary races in Minnesota at this point but the news remains interesting. Personally, I think the North Star State is going to be one of the most closely watched regions of the country this November and one big part of that will be the replacement for Keith Ellison, who is now the Democrats’ candidate for Attorney General. The race for his old House seat isn’t competitive, so the Democratic primary basically is the general election and it’s produced a winner. Ilhan Omar, a young Somali-born immigrant, was elected to the state legislature two years ago and now appears to be heading for Congress. She is one of two female, Muslim candidates to win so far this cycle.

So what does she plan to do when she gets to Congress? Making good on an earlier promise, she is going there to #RESIST Donald Trump.

Just two years ago, the Minnesota Democrat became the first Somali-American elected to a state legislature. Now she’s likely to become one of the first two Muslim women elected to Congress. And she says one of her top priorities will be resisting the Trump administration, which would forbid her from entering the U.S. if she were attempting to immigrate today.

“I myself would have been part of the travel ban,” Omar said on the campaign trail.

Her victory in Tuesday’s Democratic primary for a House seat from the immigrant-rich Minneapolis area depended heavily on support from people who feel persecuted in Trump’s America and voters who empathize with them.

She would have been part of the ban. She feels oppressed by the President. While Omar clearly earned her victory in a tough race with multiple candidates, one has to wonder who exactly she is heading off to Washington to serve. The people of her district or her own chance at settling a personal grudge?

During her victory speech, she reminded everyone of when she was eight and her family was fleeing the civil war in Somalia. “Today I still think about her, and I think about the kind of hope and optimism all of those 8-year-olds around the country and world get from seeing your beautiful faces elect and believe in someone like me.”

“Someone like me.” She certainly says “me” a lot.

The Israeli press clearly isn’t thrilled with the outcome and you could probably guess why. One quick look at her Twitter feed will tell you that Israel certainly has no friend in this new member of Congress, assuming she wins her nearly uncontested general election.

Drawing attention to the apartheid Israeli regime is far from hating Jews. You are a hateful sad man, I pray to Allah you get the help you need and find happiness.

But overall, will this really change the balance of power? Not really. Omar will be a freshman member unlikely to land any influential committee seats right out of the gate. And she’ll be replacing Keith Ellison who would have continued voting pretty much the exact same way Omar will if he’d stuck around. But hopefully, once settled into office, the new congresswoman will remember that this wasn’t a popularity contest and that she will need to represent and serve the needs of her constituents.