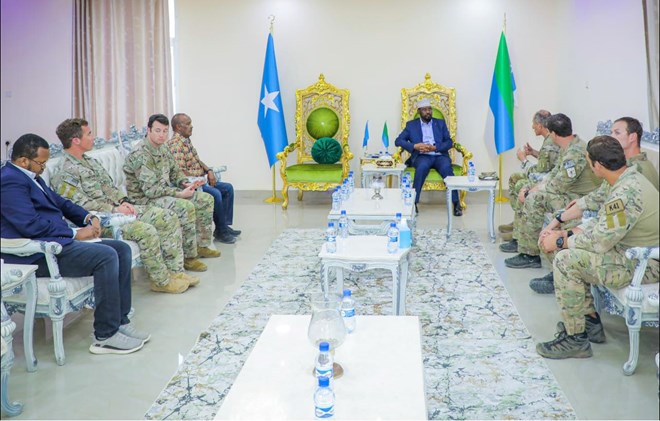 Jubaland President, a semi-autonomous region of southern Somalia, Ahmed Madobe on Saturday held a high-level meeting with US military officials in the coastal town of Kismayo, the administrative capital of the state.

Jubaland leader received at his office a US military delegation led by Col. Thomas Sarrouf, the head of AFRICOM’s counter terrorism operations in Somalia, where talks on intensifying the fight against Al Shabab have been held.

The meeting followed a visit by the Somali Army Chief Gen. Odawa Yusuf Rage to the town. who surroundings villages are still held by the militants.

US President Joe Biden sent hundreds of troops back to Somalia to assist the fight against the Al-Qaeda-aligned militant-group Al Shabab which has continued its insurgency campaign against the Somali government based in Mogadishu.

US former president Trump ordered the withdrawal of 700 troops from Somalia.

US conducts air strikes against Al Shabab camps in a bid to weaken its capability when it comes to raids against Somali government.