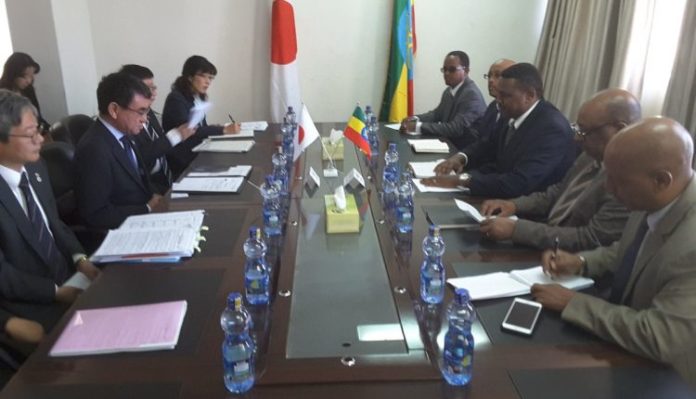 During the meeting, both sides discussed bilateral relations and cooperation on regional and international issues of mutual concern.

State Minister Dr. Markos praised the long-standing relations between Ethiopia and Japan, further noting that Japan is one of the development partners of Ethiopia.

In such score, he thanked the Government of Japan for the development assistance it extended to Ethiopia, according to the Ministry of Foreign Affairs.

Dr. Markos briefed the Foreign Minister on the bold political and economic reforms Ethiopia has embarked on under the premiership of Prime Minister Dr. Abiy Ahmed, mentioning the myriad of significant steps including widening the political space, media freedom and institutional capacity building.

Foreign Minister Taro Kono, on his part, said he is pleased to be in Ethiopia and commended the plethora of politico-economic reforms Ethiopia is undertaking, adding that Japan fully supports Ethiopia’s ambitions in this regard.

He further noted the importance of enhancing trade and investment ties between Ethiopia and Japan, which he says, lays a strong foundation for the mutually shared benefits to flourish between the peoples of both countries.

Foreign Minister Taro Kano strongly commended Ethiopia´s constructive role in maintaining peace and security in Africa in general and in the Horn of Africa in particular.

He underlined Japan’s commitment to collaborate with Ethiopia and other stakeholders to pacify peace and prosperity in the region.