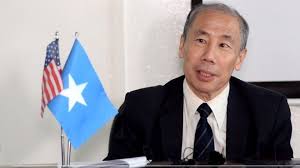 The US has reiterated its financial support to the upcoming elections in Somalia but will not dictate when it should be held, US ambassador Donald Yamamoto has said. Ambassador Yamamoto told local reporters during a virtual presser yesterday. Somalis are entitled to decide when the elections will happen but added that holding polls on time was quite crucial. “US strongly believes that election rests on the shoulders of Somalis. If you want to defer slightly, that is up to you.” ambassador Yamamoto said responding to questions on fears that Covid-19 might impede preparations for the polls. Yamamoto said: “The US will provide the best advice and also offered a package of financial support. Whatever you want to do we will support you 100 %.” He announced that the US has already set aside funds for the exercise. “We have money that we are already committed, about 6 million to oversee the election. We will hold back $ 4 million because we want to make sure that whatever we do it meets with the requirements of Somali people.” Somalia is gearing up to hold parliamentary elections in one man one vote mode of choosing in October this year with a new president to be chosen early 2021. Ambassador Yamamoto noted though it was critical to hold the elections on time, it was equally necessary to meet the requirements set in the constitution and agreed through political processes. These include ensuring a 30% quota for women and building the capacity of the electoral commission to effectively conduct the poll.